October 27, 2016 by ProofreadingPal in Editing Tools

One of the hardest irregular verbs in English to use properly is “to lie,” and another is “to lay.” Between the two of them, you often can’t tell if you’re lying about laying or laying about lying. The verbs have a multitude of overlapping meanings, and then they’re conjugated differently while being spelled the same.

However, you can become an expert if we take it one step at a time. And we’ll start with the hardest one.

“To lie” has a different meaning from “to lay.”

Technically, we’re talking about the difference between an intransitive and a transitive verb, but we don’t have to get all technical. The first you do all on your own. The second you do to something else. In other words, “to lay” requires a thing (i.e., an object) to lay.*

All of which wouldn’t be so bad, except that the past tense of “to lie” is, of all things, “lay.”

So, if I am reclining on the bed or easy chair, “to lie” works this way:

The following are correct:

Sally lies on the sofa and watches TV. Yesterday, she lay on the same sofa, but she will not lie there tomorrow. I’m going to lie down on it instead.

Now, when I’m doing the action to something else, I use “to lay”:

The follow are correct: That chicken has laid an egg every day for weeks, but yesterday it did not lay an egg. It better be laying an egg right now. 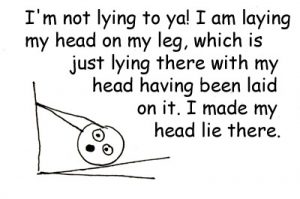 So, by themselves, the words are not so bad. And you’ll keep from being confused if you take note of the important bits:  While “lay” is the past tense of “to lie,” all tenses of “to lay” use some form of “lay.” Also, “laid” follows familiar rules as the past tense of “to lay” (e.g., say/said, pay/paid). So really, the only crossover between “to lie” and “to lay” are on the “to lie” side with “lay” and “lain” in the past.

I wish I could stop there. But wait, there’s more.

“To lie” has a second meaning.

Thank the language gods, however,  because “to lie” in the sense of being untruthful conjugates in the usual way:

Notice (and if you take away one thing from this post, this should be it) that “lied” can only be the past tense of telling a falsehood. If someone lied, they fibbed.

All of which means the following are correct:

I lied to my friend yesterday. (to fib)
She lays the law on the line. (to place)
All the kids need to go lie on their sleeping bags. (to recline)
Tomorrow the boss will lay out the cash. (to place)
He lay in bed all last night but didn’t sleep. (to recline)
You should have lied and said you had it done. (to fib)
Every day for a week now, the protester has lain down in front of the bulldozer. (to recline)
Now I lay me down to sleep. (to place)

So you can see that it’s all a little confusing, but it’s not impossible. Again, remember that “lied” can only be about falsehoods and “laying” something requires an object, and you’ll be right most of the time.

*You can make your own dirty joke there.