In my previous post I detailed the basic rules of capitalization and a few related differences in APA, MLA, Chicago, and AP styles. In today’s post, I will describe some areas of confusion about capitalization I have often observed in my work here at ProofreadingPal.

Look out, Son! I saw Dad slip on a banana peel right where you’re standing.
My aunt makes the best tomato soup.
All my brothers look like Uncle Jake.

The word “god” should be capitalized if it is being used as a proper name of a monotheistic god, as in God in Christianity and Judaism. Otherwise, the word should be lowercased, as in “the god of war.” Pronouns that refer to any god or gods should be lowercased. The main style guides all agree on this, although Chicago does have a note that capitalizing these pronouns is acceptable when writing for a religious audience.

I’ll go there tomorrow, God willing.
All those Greek gods are so confusing.
He has the body of a god, I swear. 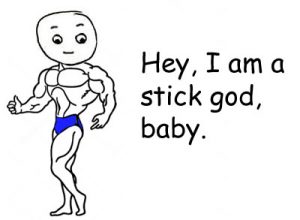 An initialism is an abbreviation using the first letters of a name or phrase where the letters are pronounced separately (e.g., IRS, AARP). An acronym is a similar abbreviation where the letters are pronounced together (e.g., NASA, NAFTA). Initialisms and acronyms are always capitalized, but the words they stand for are not necessarily capitalized.

A CD is a compact disc, not a “Compact Disc.”
RPM stands for rotations per minute.

I’ve also noticed a tendency to unnecessarily capitalize names of conditions (diabetes mellitus—DM) and processes (supply chain management—SCM), and other terms that often appear in their initialism form. So beware: those capital letters in acronyms and initialisms don’t translate to capital letters when the words are spelled out unless the words are proper nouns. Try to avoid consciously or subconsciously letting your sense of how Important or mundane something is affect your decision to capitalize.

I see many animals: dogs, cats, birds, and hamsters.
Jake wants just that: nothing.

If what follows the colon could stand as a complete sentence, APA, MLA, and AP agree that it should begin with a capital letter.

She has a point: That dog is darn cute.

Chicago’s rule differs a bit. It recommends capitalizing what follows a colon only if it’s a list of two or more complete sentences.

He is always making clichéd statements about life: Life is a bowl of cherries. Everything happens for a reason.

Cardinal and Other Directions

Directional words such as “north,” “south,” “east,” and “west,” as well as words like “upper” and “lower,” should not be capitalized unless they are used to describe an established, officially named, or otherwise definable region.

Those hipsters live in Northern California.
I come from the North Country.
Is Seattle part of the Upper Midwest?

Such words may also be capitalized when they refer to ideological or cultural regions or ideas.

That therapist is really into Eastern medicine.
I mostly cook Southern food.

However, these words are not capitalized when they deal solely with direction.

Go north for two blocks, and then turn east.
My state is in the middle of the country.
The birds are following a southern migration.

Note that many of these common points of confusion are related to where a word falls in a sentence or whether a word is being used as a proper noun (the basic rules I outlined in my previous post). So make sure to keep the basic rules in mind and consult your favorite dictionary, encyclopedia, or proofreading services when you’re in doubt about a particular word or expression.