Here at ProofreadingPal, we get a lot of requests to “elevate tone,” “create a scholarly tone,” and “increase the formality,” and even “help this sound smart.” Truthfully, we cannot make you sound “smart.” There is no substitute for good ideas, but we can (and do) help you elevate your tone and make you sound like a bona fide professional-thinking person. Here are some handy tricks that you can use yourself.

I see a surprisingly high number of formal academic/business works that include words that are better left for the water cooler or over a spirited discussion of the merits of Michael Bay movies. Some words to avoid are “totally” (use “completely” instead), “basically” (just avoid it), “impact” (mostly as a verb. You shouldn’t say “that will impact me”), “wicked” (only use this when chatting in online games), and “cool” (this word can mean just about anything. Try to choose a more precise word). In general, avoid all slang words (e.g., rad, YOLO, heaps, guv). If in doubt, see if you could imagine your professor or boss using it. If not, avoid it.

In formal writing, never use “like.” It’s probably the most commonly used feature of speech today for certain populations, but avoid it in formal writing. Compare:

See how much more formal the second sounds?

Contractions such as “can’t,” “didn’t,” and “I’m” are purely a product of verbal speech. We speak in contractions, but the convention is that, for formal, non-fiction writing, we shouldn’t write in them. When writing a formal business letter or an academic essay, forego contractions. It’s easy to use the Word FIND function to seek them out and destroy them. 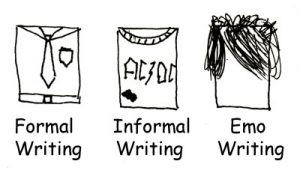 Clichés and trite figures of speech are fine in conversation, but they have no place in formal writing. Saying you had to “go back to square one” or that “it’s all in a day’s work” or “it’s all Greek to me” may seem like adding color to your work, but your professor/manager won’t be impressed. Clichés aren’t always obvious and can crop up when you least expect them, such as “that model is a far cry from the one we examined last week” or “that deal was too good to be true.” It’s best to just speak clearly and plainly so your reader knows exactly what you mean.

This guide wouldn’t be complete without a look at some common practices that people use to make their writing more formal that don’t work. Here are a few practices we end up having to correct time and time again.

5. Don’t use passive voice. Passive voice is wordy, but being formal has nothing to do with wordiness.

In all writing, wherever possible, brevity is the soul of wit. (Even I can’t avoid clichés, but at least that’s Shakespeare.) That means, always keep your prose as simple as possible. You may think, “The item that we are discussing could be the solution we are looking for to solve our problem,” sounds better because it’s long, but it’ll just annoy your reader. “That is the solution to our problem,” is better.

Some professors still insist their students use third person to make their writing sound more formal, but (and always check with your professor first) style guides such as APA (and us) recommend you use first or second person to prevent passive voice and ambiguous language. Take: “The researcher applied a qualitative approach to the study” for example. Who is the researcher? You or someone else? This is ambiguous. It’s better to say, “I will take a qualitative approach to the study,” and this doesn’t sound any less formal.