November 16, 2017 by ProofreadingPal in Editing Tools

Yes, the 17th edition of The Chicago Manual of Style has been out for a few months now, which means you really have to stop using the 16th edition, despite how much it costs to replace it. 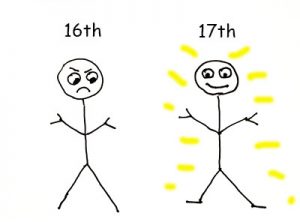 Clocking in at 1,145 pages, this is not a book meant to be read cover to cover (thank God), so Chicago has a handy guide to the edition’s updates. The problem is, the handy guide is itself somewhat daunting. (It also requires that you have access to the 17th edition, but seriously, if you’re in the biz you should.)

So I’m going to cover the top ten changes, selected not for offering groundbreaking precedent but because these are the issues professional editors are probably going to encounter most often.

Someone has left their calling card.
Anyone can sing if they try hard enough.

Chicago states that genderless pronouns such as “s/he” and “(wo)man” have been tried for some time, “with no success. They won’t succeed. And those who use them invite credibility problems” (360). Chicago calls for the use of the singular “they” with a sigh of resignation and suggests writers and editors be “wary” of its use (361).

Here’s a big one for those in the business. As long as the context makes it clear just what is meant by US, the term can be used as the spelling of the noun United States and not just for the modifier. (And note that it’s US with no periods.)

Yup. And one day this will be as relevant in the US as it is globally.

Don’t put a comma before “too” or “either” when you mean “also.” So the following are correct:

She likes hiking too.
He doesn’t care for that either.

Putting commas around the words when they’re in the middle of sentences is acceptable if doing so aids readability.

Unless there is some other reason to include it, don’t put a comma after “etc.” when you use it to end a list mid-sentence. The following is correct:

Chicago still says not to capitalize terms like “baby boomers” and “millennials,” but Generation X/Y/Z gets capitalized, probably to avoid confusion. However, this isn’t for all uses of “generation,” such as the me generation or the me-first generation.

Chicago notes that the use of “ibid.” in footnotes and endnotes to refer to the citation just given saves no space and can be confusing for e-documents that link to one note at a time.

If a website is the online version of a book or journal, such as the New York Times, then the website’s name is also italicized, like The Onion. However, if a website stands alone, such as Wikipedia and Rainy Mood®, it is not italicized.

Chicago wants capitalization for online names only if “they are trademarked as such or otherwise constitute the proper name of an organization or the like” (443).

So capitalize World Wide Web, Ethernet, and Wi-Fi. Do not capitalize “internet,” “the web,” “hypertext transfer protocol,” or “wireless network.”

So that’s the top ten changes. There are many new things as well, particularly when it comes to online resources. We’ll talk about those in another post.