Inspiration can strike a writer anytime, anywhere; it’s constantly sleeting down through the universe, waiting for a receptive mind to kindle with a new idea for a great story, article, or paper.

But because we take inspiration from everything around us—from nature, from conversations, from street signs, from the things we watch and read—it can be hard to give appropriate credit to all those many sources.

For example, that first paragraph about “inspiration sleeting down”? Author Terry Pratchett used that imagery extensively in his novels. Did I just plagiarize him by adapting the idea with my own words, or was I inspired by his ideas to reimagine them in a different context?

Plagiarism is a serious issue for any writer, and one we’ve discussed in the past. In this series, we’ll tackle some of the trickiest grey areas in plagiarism, inspiration, fair use, and more to equip you to write, and cite, more fairly and accurately.

A quick recap: Plagiarism is when you use “another person’s ideas or words without giving them credit (ProofreadingPal 2015).”

See what I did there? I found a great, succinct explanation of the concept and quoted it in full, then I attributed that quote to the author using a formal citation system.

That’s the most straightforward way to use another person’s ideas in your own writing while giving them due credit for their work and ensuring that others can refer to the original.

But what if you’re writing fiction and don’t want to interrupt the flow of the narrative with formal citations? Or even creative nonfiction or memoir, where you might reference others’ ideas but want to keep the text streamlined?

Formal citations are ones that use a citation system like Chicago Manual of Style, APA, or MLA to attribute the source of any work referenced or used in the paper. They’re mainly used in academic papers and sometimes in business writing.

In contrast, informal citations incorporate information about the source of a quote or idea in more freeform ways. For instance, a blog post might read:

One recent study showed that 37% of students had plagiarized without even knowing it.

This doesn’t show the source, which is a problem when citing. If there’s text in that source that’s close to what you’ve written, it could be considered plagiarism. Plus, it doesn’t let your readers find the original material to read for themselves.

A good practice here is to include a “Resources” or “References” section at the end of your chapter, blog post, or book. Many nonfiction books meant for a popular audience do this, adding superscripts to the text and including references at the end of the chapter or collected by chapter at the end of the book.

When creating informal citations, make sure you provide all the information your readers will need to locate the original source and format every entry in a consistent manner.

When Is Inspiration Plagiarism?

All writers—indeed, all artists—are inspired by a variety of sources. We’re immersed every day in a rich sea of ideas, all of which might find their way into our work.

But how do you know when you’ve crossed the line from inspiration to ethical violation? 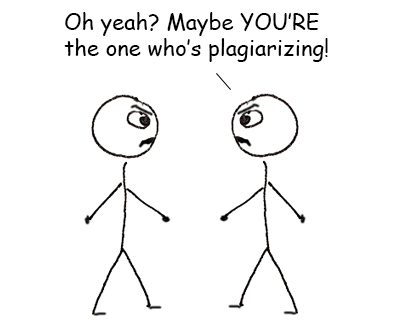 As we discussed in our articles on fanfiction fairness and fair use, there are certain allowances that can be made for being inspired by another creator. Maybe you watched a couple movies this weekend and got an amazing idea for a story that mashes up a spider-themed hero and a time-travel romance. Do you have to credit Stan Lee and Spider-Man along with Audrey Niffenegger’s Time Traveler’s Wife?

Well, as long as you’re not using their characters, plots, names, and so on, you don’t. But it would be best if you noted that they inspired you in your acknowledgements; that’s the ethically sound thing to do, and it’ll avoid readers scratching their heads and going “But isn’t this a mashup of . . ?” and wondering what you did there.

The trouble comes if your inspiration doesn’t involve transformation. Several writers, particularly in the romance world, have gotten into hot water for being “inspired” by other authors and incorporating whole scenes into their books that were originally written by , usually with only a few words changed.

Readers are smart and perceptive, and the Digital Era makes it very easy to check whether a passage has occurred in another book. Rest assured, if your “inspiration” is actually plagiarism from another creator, someone will call you out!

This is where paraphrasing and rewriting come into play.

Paraphrasing involves rewriting another person’s idea using your own words. If you do this, you should still cite the source, especially in a formal academic paper.

In fiction and in creative nonfiction, it’s more acceptable to “steal like an artist,” as author Austin Kleon said, but you should still strive to attribute your inspirations. Link to the people and sources that boosted your own creativity, provide an “Inspirations” section at the end, refer readers to your favorite books or movies for “more like this,” or acknowledge your sources in some way.

More important, you should aim to completely transform both the idea that inspired you and the words you use to convey that inspiration to be wholly your own.

Not every single concept you convey or every word you use will be unique. After all, there’s only so many words in the English language and only so many ways to put them together. However, giving credit where credit’s due and striving to be original in your work puts you on much more solid ground when it comes to plagiarism.

And besides, it just makes for far more interesting writing.

Next time, we’ll discuss citations of works that aren’t under copyright and more. Stay tuned!