Cell Phones and Why We Write

He pulled out his cell phone, and he won.

I don’t mean he looked up some information and then spoke to defeat my argument. I mean he won with the simple action itself. He had something to wave around as superior to our conversation, and with that, I was dismissed.

I’m not usually one to speak against gadgets and gizmos, and I’m almost surgically attached to my phone myself. But there is one thing I hate about this handy little box in our pockets: they can A-bomb face-to-face conversation.

Before these amazing phone/internet/camera/game/movie things, we had conversations that would end in—Can you believe it?—awkward silences. You could be rude, sure, but the social penalty of your rudeness was that same awkward silence. Two (or more) people had to sit there well aware that a line of civility had been crossed. The silence and its discomfort were a condemnation.

Now, however, you can be as rude as you like and then pull out a cell phone.

Civility is the world’s second-best social lubricant, and from the first day of their public appearance, cell phones have interrupted parties, luncheons, meetings, and simple how-do-you-dos.

This is perhaps the most overt practical demonstration of the haves and have-nots. This is why millennials—who are savvy, not spoiled—know better than to leave home without an iPhone/Android/Galaxy in their purse or man bag. 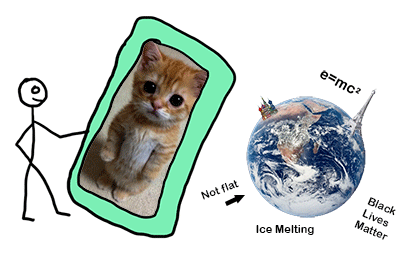 Don’t like the discussion? Just whip it out and stare.

Time marches forward, so what does this all mean for the future of social communication? Is “I’m looking at my phone” going to replace “This discussion is over,” “Screw you,” and “Quod erat demonstrandum” all at once? And what does all this have to do with written communication?

Although the prop is new, being stymied when you’re trying to say something is about as old as time. As intimidating as that blank page can be, at least it just sits there and lets you compose without logging into an app. Writing, not speaking, is the ultimate expression of the thoughtful point, the insightful analysis, and even just some long story that bores everyone but you.

And if cell phones are the new rude, blogs would seem to be the new solution.

People are always asking questions like, “Why do people write fanfic?” and “What’s the point of keeping a journal?” and, more recently, “Why are there blogs?”

Journals, essays, and letters have been the traditional safe havens for those who want to express themselves without having to worry about the civility of their audience, but the blog post, in particular, is the perfect online oasis for written expression.

And I’m not talking about blogs like this one, which is a repackaging of “how-to” articles and DIY advice.

I’m talking about the pure, uncommercialized postings that actually gave rise to the form (web + log). You know, the ones with entries like this:

Breakfast was OK this morning, but I prefer Shredded Wheat to Cheerios. I think they were a little stale. It makes me think of that movie where the guy shrinks his kids and almost eats them in his bowl of Cheerios. Freud would have a field day with that one; don’t you think? AFN.

Watching that jackass pull out his cell phone rather than answer my question made me write this post, and I don’t think I’m alone with this. Blogs and other informal written conversation let you relax and say what you want to say. There’s no need to worry about the person looking over your shoulder and asking, “Who’d want to read that?” (which calls for the classic response, “What’s it to you?” and now you’ve forgotten your point).

Do I think we’re headed for a future where we eschew face-to-face conversation and write and read blogs all day? No. But I do think the internet offers a solution to the cell phone-as-conversation-ender by letting you go online to say how you feel about it.

Who knows? With a little luck, Mr. Jackass might read this one day!