Place Order Get Instant Quote Free Sample
Home  /  Grammar   /   An Easy Guide to Articles: A, An, and The

An Easy Guide to Articles: A, An, and The

September 10, 2020 by ProofreadingPal in Grammar

Editors develop odd skills, and a common one is being able to tell the native language of  EFL (English as a foreign language) writers by the types of mistakes they make. Different languages don’t just have different vocabularies and syntax; their speakers incorporate different abilities and concepts as the language develops. For example, English has lost the distinction between the formal “you” and the informal “you” that Spanish, French, and many other languages have.

A surefire sign that the EFL writer’s native tongue is an Asian language is confusion over the use of articles because most Asian languages don’t use them.

It’s amazing what gibberish good writing can become when the articles are wrong:

Newspaper and magazine cutouts of horses decorated a walls and only light came from small plug-in night light. An electricity didn’t come to farm until mid-2000s.

Native English speakers mess up their articles too, so let’s understand just how they work and why they are used.

There are three articles: “a,” “an,” and “the.” All of them function as adjectives.

“A” and “an” are called indefinite articles. They tell us that a single object or group of objects is coming up in the sentence. When an object or group is being introduced, we always use “a” or “an” and not “the” (unless it’s part of the proper name, like The Met) because we know nothing about the object or group except that it is singular.

“The” is called the definite article because its main function is to tell us that an object or group (whether singular or plural) we already know about is coming up.

Let’s see this in action:

A tall tree had grown up from the ground.

We don’t know about the tree before we read this, but there’s only one “ground,” so we say “a tree” and “the ground.”

An excited girl ran up to a car and knocked on the window.

We don’t know about the girl or car, but we know the window belongs to that car. If we said “a window” in that sentence, we wouldn’t know if it were the car’s window or some other window.

A fire truck roared past our car. Then the truck stopped.

“The truck” makes it clear the truck in question is the same truck as in the previous sentence.

The world has never seen a statue like this one.

There’s only one “world” in this context, but we know nothing about the statue yet.

Bearing in mind that the author has already told us there’s a room on a farm, let’s look at that passage again:

Newspaper and magazine cutouts of horses decorated the walls, and the only light came from a small plug-in night light. Electricity didn’t come to the farm until the mid-2000s.

“An” is used strictly to make sentences sound better. It sounds unpleasant to say “a apple.” Try saying it aloud. It’s harsh. The “an” smooths out the sound: “an apple.”

The rule to remember for using “an” instead of “a” is that it’s determined by the sound of the word, not the spelling. So:

A history professor spoke for an hour.

I have a use for an umbrella. 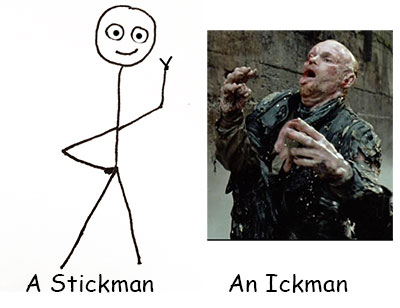