November 29, 2019 by ProofreadingPal in Grammar

An important part of research writing is accurately expressing conditional, hypothetical, and factual ideas, but some writers, no matter how solid their research, stumble over use of modal verbs when it comes to expressing these ideas. In today’s post, I’ll provide a review of the forms and use of modal auxiliary verbs and conditional statements and some basic tips to help you use them effectively in research writing.

First, some basics. A verb is a word that expresses an action or a state, and almost every sentence needs a verb to be complete. Verbs are often used by themselves in their simple forms, as in the sentence, “The bird flies.”

English verbs come in lots of different tenses and moods and often must be combined with auxiliary verbs (also known as helping verbs) to be complete. Be, do, and have are common auxiliary verbs used to express tense, such as, “The bird has been flying,” which uses two auxiliaries to form the present perfect continuous tense. Be, do, and have change form depending on the subject of the sentence. So, we see, “I have flown,” and, “The bird has flown.”

Modal verbs, a subcategory of auxiliary verbs, are important when expressing the conditional mood, the mood used to express possibility, likelihood, necessity, and obligation and in if-then statements. Modal verbs include may/might, can/could, shall/should, and will/would and are used like this: “The bird might fly,” or, “The bird would fly.” Modal verbs do not change form depending on the subject. These verbs are actually present/past tense pairs, but as I’ll discuss later on, the tense of these verbs can be misleading at times. 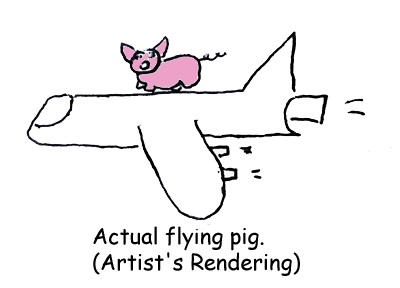 In research writing, the difference between hypothetical and factual statements is critical; your choice of verb helps make the distinction. You state a fact using simple past, present, or future. Imagine a study of a newly discovered creature, the flying pig: “The study revealed that, in fact, some pigs fly.” You express a possibility using a modal verb, and which you choose depends on the likelihood of the statement:

Reading such conditional statements, you probably find your mind starting to fill in an if statement, such as, “if they grew wings,” because modal verbs are generally used in contexts where conditions are either implied or stated, as is often the case in research writing.

Could, should, would, and might are all past tense forms, but they can all be used to refer to the future as well, which can be confusing. For example, “The study shows that pigs could fly if they had wings,” does not refer to an actual event in the past but to a possible event that might happen in the future. Perhaps because the line between past, present, and future is not black and white in conditional statements, errors crop up in terms of incorrect tense usage. Specifically, in if-then statements, which have two clauses (and two verbs), tense issues can plague you.

Today’s post offered a basic review of the general use verbs and conditional statements. In a future post, I’ll get a bit more technical with the four types of conditional sentences and the use of tense in their construction.