Place Order Get Instant Quote Free Sample
Home  /  Grammar   /   Correct Use of Myself, Yourself, Itself

Correct Use of Myself, Yourself, Itself

June 7, 2019 by ProofreadingPal in Grammar

Here’s an error I started noticing around the ’80s, and it seems to stem from people’s difficulty with saying “I.”

Now, I first noticed the “I” problem back when I was a little kid and reading Judy Blume books. (If you’re too young to remember Judy Blume, think J.K. Rowling, except storylines about bras and wet dreams instead of spells and wizards.)

Blume, in a child’s first-person narrative, starts sentences with objects instead of subjects, such as, “Me and Donna went to the movies.” Children’s authors do this to try to sound like kids and relate to them by perpetuating bad grammatical habits.

People seem to think it’s snooty to say, “Donna and I,” but when they grow up, they also become aware that “Me and Donna” is wrong. So, faced with the choice of “I” (snooty) and “me” (wrong), some opt for the worst choice of all: “myself.”

So, we now have people saying “Myself and Donna” and its many popular, quite horrible variations:

• This was done by myself and several members of my team.
• I want to thank your workers and yourself for our success.
• They arrested several people, including myself!

A Reflection Requires Both an Object and a Mirror

The -self pronouns are what we call reflexive. They refer back to a noun or pronoun that has already been put in place. They cannot function alone anymore than a mirror facing nothing can show a reflection.

The purpose of reflexive pronouns is to allow interaction between the thing and its reflection. For example:

• I told myself to stop screaming.
• He thinks too little of himself.
• The queen herself gave the order.
• The twisted whip hit itself.
• Go check it yourself.*

*Hey, you might be thinking, there’s no “you” in that sentence. Remember that commands always have the implied subject of “you.” You can even write it that way: “You go check it yourself.”) 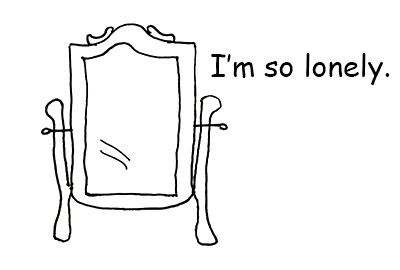 Saying things like “Myself and the president thank you” is so incredibly incorrect, I can’t help but wonder why this usage has become so popular. I see it these days not just from college athletes and rock stars (whose grammar is typically atrocious), but from public speakers and civil leaders. What’s going on?

For one thing, we’re probably seeing the same sort of “longer words sound smart” thinking behind incorrectly saying “utilized” instead of “used.” Reflexive pronouns are said less frequently than subject and object pronouns (or at least, they used to be), so if you don’t know your grammar, “My team and myself would like to thank the academy” might sound fancier.

Other people I’ve been listening to incorrectly treat reflexive pronouns as some sort of third-option copout when they can’t decide whether the word is an object or a subject. Don’t know whether it should be “he” or “him”? Just use “himself!”

How to Avoid This Mistake

Fortunately, avoiding the misuse of reflexive pronouns is easy. Just never use one unless you already have a noun or pronoun in that sentence referring to the same thing. It doesn’t matter if the thing has been discussed in the paper or paragraph. It needs to appear in the same sentence. The following is wrong:

• I just love seeing all these new faces. I’ve done a lot of recruiting work. As for myself, I know we’re going to have a great year.

The following is correct:

• I just love seeing all these new faces. I’ve done a lot of recruiting work. As for me, I know we’re going to have a great year.

The following is also correct, if somewhat irritating:

• I myself just love seeing all these new faces. I’ve done a lot of recruiting work myself. As for me, I know we ourselves are going to have a great year.