How to Write without Clichés: Part 1

We’re told to avoid clichés in our writing, but just what is a cliché, why is it bad, and how do we write without using one?

Well, first, don’t try to memorize some list of clichés. There are thousands of them. But also don’t worry that every single phrase you write has to be completely original. Most of what we read and write is familiar and certainly has been said before.

The only way to write without clichés is to know what clichés are, what they aren’t, why people want to use them even when they know they shouldn’t, and where those little suckers like to hide.

(In this post, we’ll talk about what clichés are and aren’t. We’ll address the rest in the Pt 2.)

A cliché is a phrase, or a string of words acting together, that has been so overused and generally applied that it means almost nothing anymore and has no impact on the audience. It is old, stale, worn-out, and usually annoying.

Note that identifying a cliché involves a judgment call. A cliché in a romance novel may have great impact when uttered at a party, and something nice your friends say about you can become a cliché when used in an application letter.

That’s why memorizing a list of clichés doesn’t work. You have to think about your audience and your subject matter. If your audience has heard the same phrase about the same thing a hundred times, that’s a cliché.

So Why Are Clichés Bad? 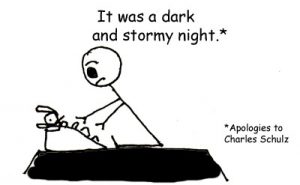 Clichés are poisonous to writing because they go against the entire point of writing. We write to convey our thoughts to others so that they are influenced by our words. But clichés are not our words. They are previously owned and obedient to their old, trite masters. They don’t really mean what we mean; they reflect nothing of us.

What Clichés Are Not

Fortunately, not every phrase you’ve heard before is a cliché. Get a better handle on clichés by knowing just what isn’t a cliché.

An idiom is a phrase in which the individual words don’t seem to add up to the overall meaning. Idioms are language specific and culture specific. Idioms are those phrases that people from other countries don’t get. American idioms include “a piece of cake” (meaning “easy”) and “get bent out of shape” (meaning “get upset”). A British idiom I’m fond of is “taking the piss” (meaning “making fun of someone”). A good French one is “be milky soup” (meaning “be quick to get angry”). I’d mention a good Russian idiom, but this is a family-friendly site.

Idioms are not clichés. Idioms can become super-popular and thus get overused, and that’s when they become clichés. But most idioms are just figurative turns of phrase.

A buzzword is a fashionable term or phrase, usually regarding business, and pretty much all buzzwords are doomed to become clichés in time.

A business buzzword in fashion in America in July of 2015 is “lean.” Many business are seeking “lean” practices, which basically means “making the most of available resources.”

As for business clichés, here’s a half-dozen that mean pretty much the same thing; they’ve just gone stale:

All that’s really different between any buzzword and a cliché is time. Making the judgment call here is like sticking your nose into a suspicious bit of ‘fridge Tupperware. Smell stale? It’s a cliché.

Clichés are also not quotations, such as, “Give me liberty, or give me death.” Neither are they standard conversational phrases, like, “How do you do?” and, “I’ll see you tomorrow.” Clichés are not euphemisms, like saying someone has “passed away” rather than “died.” Clichés are not common signs, such as, “No Smoking,” and they’re not proper nouns, like “First Amendment,” or titles, like “chief of police.”

To be a cliché, a phrase must have originally had some sort of special meaning, from being funny to being figurative to being fashionable. It’s only when people seek to express that special meaning so often that it loses its meaning altogether.