Many groupings of words are similar in sound or spelling but have different meanings. Even native speakers don’t always know which to choose in a given situation. In this blog post, we talk about the meanings and uses of some of these commonly confused words and offer some tips to guide you in the future.

Today, let’s look at a word pairing that can trip up even experienced writers (and some proofreaders): the almost-twins “affect” and “effect.”

This distinction is especially tricky because, although one of these two has a specialized secondary meaning (which we’ll examine in a moment), in the overwhelming majority of uses, affect and effect convey the same concept but act as different parts of speech.

The most common use of these words is in reference to causes and influences. Something is acting upon something else to produce a response. In this sense, you’ll (almost always) use affect-with-an-A as a transitive verb.

Chaos theory holds that the flapping of a butterfly’s wings can affect weather patterns half a world away.
Heavy rains can cause floods, affecting harvests.

For nouns and adjectives, use the E spelling.

This phenomenon is called the Butterfly Effect.
Levees provide an effective defense against floods.

The major exception to the E-for-adjective rule comes when a gerund (the –ing form of the verb) forms part of the adjective: 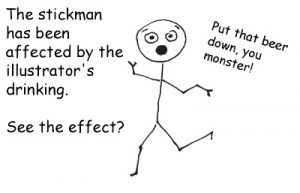 In this example, the phrase “weather-affecting” acts as an adjective, modifying the noun “butterflies,” but because it retains its meaning as a verb, it retains its A spelling.

As a general rule, use affect when talking about action and effect to name or describe the end result. Action comes before result: A comes before E.

She affects others. She gets the desired effect.

Now for that specialized meaning. There are a number of applications for the affect-with-an-A form as a noun and an adjective. Luckily, these are pretty easy to keep straight because they mostly have to do with feeling “affection.”

These emotionally oriented meanings pop up in common phrases used a psychological diagnoses and movie reviews. For instance, a person who is emotionally undemonstrative may be described as having “a flat affect.” As a noun, affect refers to someone’s perceived emotional state or demeanor, and it’s pronounced, just this once, in two equally stressed syllables and with a short A as in cat. You would say “flat affect” with the same cadence as “Ben Affleck.” (No reflection on Mr. Affleck’s acting skills.)

Similarly, you might know someone who gets depressed during the winter months. This is known as “seasonal affective disorder.” “Affective” here relates to the person’s emotional state.

Or you might hear the adjective “affected” (or the related noun “affectation”) to describe a false or stilted personal manner; affect can also be used as a transitive verb for putting on such a display.

He’s naturally soft-spoken, but he affects a hearty guffaw at every joke.
That laugh is obviously affected, and the effect is simply pathetic.
His manly chuckle was a most annoying affectation.

The final exception (because in English there’s always one more exception if you look hard enough) to the A-for-verb guideline comes when we use “effect” in the relatively rare sense of bringing something definitively into being, rather than simply exerting an influence. To “effect a solution” is to solve the problem, whereas “affect the solution” would mean to have an influence on a possible future solution. So when implementing a final result, or getting the job done, use the verb “effect.”

It’s all perfectly logical, going back to the “final result” sense of the noun effect. No? It’s a little obscure? Well, that may be why people have started using “impact” as a verb, even though it’s still technically wrong.)

In all other cases, the verb is affect. If you’re truly baffled, use that as your rule of thumb. Language is complex, and following the rules (such as they are) can’t always guarantee you’ll get it right, though it should make you less likely to get it wrong.

We hope this blog makes you a more effective writer. And remember, it’s interactive, so you can affect what topics we cover. If there’s a particular word pairing you’d like to see explained, leave a comment below and we might cover it in the months to come!