Because culture and business flow so freely across the border, we in the States are often taken aback when Canada reminds that us that it is, in fact, a whole ‘nother country. Such was the case recently when Canada mourned the retirement of Ontario-based rockers the Tragically Hip, who remain largely unknown south of the border. And such is the case when an American tourist picks up a Calgary newspaper and sees that stubborn “u” in the middle of flavour.

Canadian English is unique. Neither American nor wholly British, it’s a robust hybrid of British Commonwealth English and cross-border influences. Before we can assess the Canadian dialect, though, we need to understand how global languages become localized, and for that we need to examine the origins of American English.

American English from “Soop” to Nuts

The first thing to understand is that US English is, in many ways, an outlier. English is spoken around the world, of course, though mostly as a second or third language. In countries where it’s the language of business—the former imperial outposts—the variety of English is recognizably British. This is the Queen’s English, the language of defence and gaol and criticise. It may be splashed with local colo(u)r, but it takes its cues from the Oxford English Dictionary and the Encyclopaedia Britannica.

In the States, our sense of what constitutes “proper” English can be largely traced to the efforts of one man, Noah Webster. Born in 1758, Webster produced his American Dictionary of the English Language while the United States was still a young country. An ardent nationalist, he believed that America’s language should reflect its values (as he defined them) of honesty, simplicity, and plain speech, and he would use his dictionary to make it happen. 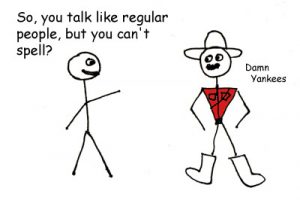 To be fair, English spelling was still largely unstandardized in Webster’s day. Dictionaries were still a fairly novel concept; one author might write jewelry while another wrote jewellery, and there was no authority to say which one was right. In his American Dictionary, Webster favored simpler spellings as the standard. Some of his preferences—dropping the final –k from words like publick, for instance—were soon adopted even in the Old Country.

But Webster was also an advocate of “spelling reform,” a Utopian scheme to make the language easier to learn by adopting purely phonetic spelling. We see phonetic principles at work in American English; but we can be thankful that some of Webster’s more bizarre prescriptive spellings, such as soop, wimmen, and toothake, didn’t take hold.

Where American and British spellings vary, Canadian English opts for the British version in most cases, but not all. Canadians use the double L in words like traveller, retain the U in neighbour, and favor the -re ending for theatre and centre. And they distinguish the noun and verb forms of some words (practice/practise and licence/license, for instance) whose two forms would be spelled identically in American English.

But Canadian English has adopted the American standard of spelling words like itemize with a Z—although in Canada they call it a “zed.” And many other common nouns get the American spelling, such as curb and tire (as opposed to the British kerb and tyre).

By the way, Microsoft Word gives you spellcheck optimized for Canadian English, among a host of other languages. Select the text, then click at the bottom of your screen as shown; select your desired language from the pop-up menu. 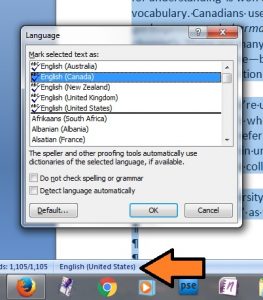 Spelling, like an accent, gives language its “flavour,” but unfamiliar vocabulary can hinder understanding. Canada and the States share many words. Canadians use our familiar truck, gasoline, elevator, and pharmacy rather than lorry, petrol, lift, and chemist’s. The odd Briticism or French loan word crops up occasionally, but for the most part our two nations use the same nouns and verbs, though there are notable exceptions: 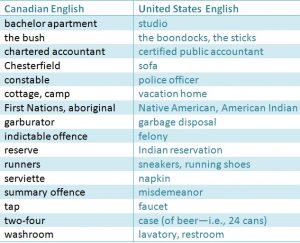 Even when we’re using the same words, though, we’re not always using them in the same way, and that’s where the real potential for misunderstanding arises. For instance, Canadians will use university to refer to any four-year post-secondary education program. So while an American would go to college at Harvard University, a Canadian might go to university at Dartmouth College. And Canadians at university don’t take tests, as American students would; in a unique Canadianism, they “write a test.”

The best news for American proofreaders is that Canadian punctuation works the same as American. Two quotation marks outside the comma and period, a period after abbreviations like “Dr.” and “Mrs.,” and a comma before the conjunction joining two independent clauses.