August 3, 2015 by ProofreadingPal in Resumes

Which organizational format is appropriate for your resume? You may not have even realized you had a choice. The vast majority of resumes still use the familiar reverse chronological format. In this setup, the focus is on the particulars of the applicant’s work experience. The centerpiece of the resume is a list of your last few jobs, with start and end dates and a brief description of your duties for each.

The reverse chronological resume is so widely used because it tells a story. By telling your recruiter where you are and from where you have come, you are constructing a narrative running down the progress of your career. Reading that story, the recruiter can see how your duties have grown more complex over the years and how you have shouldered ever-greater responsibilities. 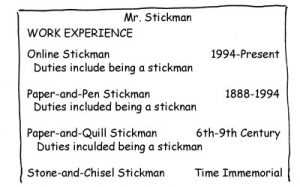 It’s such a generally applicable structure because it reflects the way that most people experience their careers—as a more-or-less continuous upward progression. We climb the corporate ladder in our chosen fields, rising higher with each promotion with occasional lateral moves. The reverse chronological resume makes it simple to trace an applicant’s journey up the ladder. This makes it ideal for those seeking jobs that are a natural next step on their existing career path. It’s particularly well-suited for corporate positions, such as managerial and executive jobs, and for careers in the trades.

In the new “knowledge economy,” though, there are increasing numbers of workers whose career paths are less suited to the reverse chronological resume format. They may be freelancers, or consultants, or contractors. They may find their assignments through a placement agency, or they may be self-employed. The gigs, when they get them, may be brief—sometimes only a few weeks. Indeed, there may be lengthy gaps in their employment history when they do not seem to further their careers at all, taking time instead to further their educations, travel, or pursue passion projects.

Such individuals are often highly skilled, but their expertise is accumulated during strings of short temporary assignments, rather than during an extended tenure with a single employer. The upward trend of their careers may not be apparent from a listing of their start and end dates at this assignment and that one. For these freelancers, where they come from is ultimately less important than what they know. The common reverse chronological resume is simply the wrong model for them. The functional resume is a workable alternative.

A functional resume is less a story than a snapshot. The work history is replaced by a list of relevant skills, abilities, and achievements sorted by their relevance to the job for which you are applying. No mention is made of where or when those skills were acquired or to what ends they have been used. This format can be useful for applicants whose career path hasn’t followed a traditional upward trajectory. For instance, a consultant or contractor may perform essentially the same duties for a number of clients, sometimes on a short-term basis. The skills and the results are the selling points, and a functional resume places the spotlight straight on them.

The functional resume can also be helpful to applicants who are changing careers or who have spent some time working outside their chosen fields, such as those who have just finished a degree or training program or those who have been underemployed because of an economic downturn. There are plenty of trained engineers and sociologists who have spent the last few years working double shifts at a convenience store while waiting for something to open up in their fields. That’s no cause for shame, of course, but their duties at the Kwik-E-Mart may not be particularly relevant to the jobs for which they are applying.

Is a functional resume right for you?

The answer will depend not only on your background but also on the type of position for which you are applying. If your work history describes an upward career arc, even with the occasional bump in the path, then by all means use the traditional reverse chronological format. Some recruiters tend to look unfavorably on functional resumes precisely because they can cover career gaps; this can give the impression that the applicant has something to hide. If the position for which you are applying will require security clearance or a background check, then the reverse chronological format is still your best choice.

For freelance or contracting positions, however—especially remote positions or those with a high degree of autonomy—a functional resume is an opportunity to put your skills front and center.