March 1, 2017 by ProofreadingPal in Writing Fiction

So you want people to pay you money to read your stories? Great, but make sure your current amateur status doesn’t show by avoiding unprofessional habits. 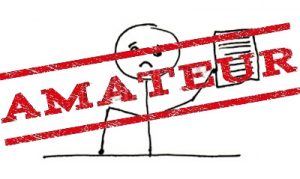 The following come from my own mentors, most of them editors for publishing houses. I’ve found their advice to be solid gold, and these warnings have served me excellently as both a writer and an editor. These are both things that can get work “tossed in the round file” even if other aspects of the writing are strong. They simply scream “unpublishable.”

Stick with He Said and She Said

When it comes to attributing dialogue, keep it simple.

People don’t really register “he said,” except to ID the speaker. “Said” and “asked” are the most common, most neutral verbs for speaking. Consider these alternatives:

In contrast, “said” and “asked” are almost invisible.

Usually, writers should favor variety, such as with imagery, sentence structure, and character development. But when it comes to dialogue, the actual spoken lines must take center stage. When you replace “said” with something less common, you draw attention to this verb and its attributes, interfering with the readers’ ability to “hear” the dialogue for themselves.

All that readers usually want to know about spoken words is who is saying what. Stick with “said” and “asked.” It’s boring for you, but fades to the background for the reader. Use other words only if understanding of the dialogue requires it, such as:

“Lovely thought,” he sneered.
“I love you,” she whispered, hoping no one else would hear.

And absolutely, positively avoid being cute with this. A colleague of mine who reads slush piles for ::cough:: House will automatically chuck something in the trash if it does something along the lines of:

“Mr. Hakuji?” she sneezed.
“D-do you love me?” he hic-coughed.
“What do you want?” the dark general thundered with storms in his eyes.

Writing has little tricks for emphasis, such as exclamation points, repetition, italics, and ellipses. But the problem is that they all quickly lose their power. (Think of listening to someone who has to swear every other word. At first, there is an impact. Then it’s just annoying.)

Exclamation points shift the emphasis off what you are saying to your tone, but the content and the tone should work together. The sentence construction of repetition, “It was a stone, a stone that was green,” or ellipses in dialogue work . . . well . . . only a couple of . . . times. After that, they’re distracting. You should save all emphasis tricks for when you absolutely need them the most. Let what you say make the impact, not the punctuation.

And for the love of all things literary, nothing looks less professional than using ALL CAPS or multiple exclamation points!!!

And here is a good time to note one of the major differences between a lecture and the written word: a repeated phrase works quite well when done correctly (e.g., “Yes, we can.” “I have a dream.” “Build that wall.”), but on the page it quickly looks like the writer is running out of ideas. Unlike in speech, the written word doesn’t “go” anywhere. It sits there for readers to choose to reread and review at their leisure.

Here at ProofreadingPal.com, I’ve seen that a lot of unprofessional writing seems to come from a lack of confidence that the reader is paying attention. Repetition, heavy emphasis, and cute wording are deployed as tricks to keep readers’ interest and make sure they “get the point.”

A professional writer is confident that readers will be attentive and can work things out when there is some fun ambiguity, a pointed irony, or a subtle message. If you want to look and sound professional, be confident that your story is enough to keep the reader engaged and leave those tricks behind.