April 14, 2016 by ProofreadingPal in Writing Fiction

“And what is the use of a book,” thought Alice, “without pictures or conversations?”

Stories survive on their dialogue. Yes, there are some great novels with page after page of narration and description, and if you’re a future Nobel-winner wunderkind, more power to you. For the rest of us, it’s in conversations that characters primarily reveal themselves, interact with each other, and live out a story’s social life.

There’s a story that scriptwriter Harve Bennett told me once. (Ooooh. I name dropped!) Back then, movie scripts put dialogue in double space and the rest—action, description, scene setting—in single space. Early in his career, Harve worked with a producer who was kind of a nuts-and-bolts guy. He produced films that turned a profit because they didn’t cost much and had a dedicated audience (i.e., horror). Harve summed up the guy’s approach to work with one sentence: “He always told me, ‘I don’t read that single-space shit.’”

In any kind of story, quality dialogue must do three things:

For the most part, even new authors have little trouble with the first criterion. It’s the second and third that usually trip them up. Over and over I find when editing fiction that the characters don’t sound like real people, and all the characters sound the same. 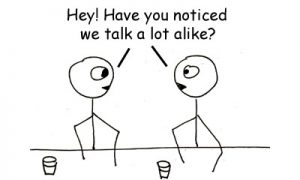 The good news is that writing good dialogue doesn’t have to be hard if you just remember that you talk to people in Real Life all the time. So here are three tips you can start using right away to improve your dialogue by making it human-like and character-specific.

Absolutely the most important thing is just to pay attention to how people talk around you. Notice the words they use, the times they use fragments, and the times they slow down to explain things in full sentences. Listen to how they talk among friends. To how they make speeches. To when they’re angry. To how (most of the time, actually) they don’t talk with much emotion. To how rarely they hiss or spit or scream with delight.

Listen to small talk and to someone blowing off steam. Listen to someone who’s drunk or high or sleepy or wired on caffeine.

Listen to the 500 or so words we use in daily life and the simple sentences we make.

Take a couple of characters you like from a TV show, book, or movie and write them having a conversation. (Actually, fanfic is another great way to work on dialogue, but that’s another post.)

Do yourself a favor and pick characters with a distinct way of talking, like Walter White, Elizabeth Bennet, Miss Piggy, Captain Picard, Scarlet O’Hara, or Darth Vader. And pick two people with decided differences, like old guy/young guy, man/woman, or rich girl/poor girl.

Try to get the voices down in your head. What words, what phrases, what level of education are you dealing with? Do they use colloquial phrases? (Don’t cheat and rely on catchphrases like, “Eat my shorts,” and, “No soup for you!”) Do they tend to speak with silences, or do they love to give speeches?

When you have a page of dialogue that sounds good, give it to friends without telling them who’s talking. Can they tell?

When writing dialogue of your own, put all that listening to use by speaking the dialogue aloud. Yes, you might feel ridiculous doing this if you haven’t tried it before, and it’s probably best not to do this while other people are around. But just pay attention to how you sound as you speak the lines you’ve written and to how the words make you feel.

Do you sound like you’re talking or like you’re reciting? Do the words help you to feel what you want the characters to feel? Do you have the urge to change your voice as you switch between characters? Do you want more dialogue so you can keep talking?

And if you’re not there yet, just keep listening. It’s how you learned to talk in the first place.