How to Write Stock Characters: The Likeable Superman

February 16, 2018 by ProofreadingPal in Writing Fiction

Stock characters can be wonderful if they’re written correctly. After all, they’re just a take on archetypes, which are revered for their timeless insights into humankind.

When we study classic approaches to writing stock characters, we can understand why people like them and want to see more of them. Writing a likeable (or intensely dislikeable) character is arguably the greatest challenge of fiction. So in this series, I’m going to break down specific stock characters to see how they’re made.

This time, let’s look at the Likeable Superman. This is someone who is legitimately better than humans but still a potential friend. Recent popular Likeable Supermen in the movies and on TV include:

Now, these are literal superheroes. The characterization can be made human, such as with the Absent-Minded Professor (often now the Autistic-ish Genius), but it doesn’t stretch the other way, as angels/gods and God are their own stock characters.

Among these examples, Data from Star Trek: The Next Generation really epitomizes the Likeable Superman. As the list shows, Star Trek series typically have a decidedly superior character who is fascinated by humans, and Data is the one for The Next Generation. In their fascination, we get to see some of humanity’s best and worst attributes. For that to work, though, the Superman has to be likeable (i.e., sympathetic).

We like characters we identify with, and when we don’t relate to them, we don’t believe them or particularly care about what happens to them. Supermen are inherently difficult to like because most of us don’t identify with having superpowers (though we do identify with wanting to have them).

A character who is truly superior in every way is not just dull but also off-putting. On the surface, Data is not best-buddy material. He’s a machine and thus may not have a true consciousness (or soul). He’s ridiculously smart and knowledgeable, and he’s super strong. He also likes to correct people, especially in early seasons.

So what did the writers do with Data to make him likeable? They did several things you’ll have seen in other Likeable Supermen.

First, his appearance. Though obviously not human, he still looks like an average sort of guy. He’s not super handsome. He’s approachable. He has kind eyes and sometimes makes childlike expressions. He has a pleasant, though formal, voice. He’s well-groomed, and his body is fit but not particularly impressive.

Hey! you may be thinking. Other people on your list are gorgeous! Well, we’re talking Hollywood movies here, where being beautiful is just part of the costume, especially for women, who run the biggest risk of having their beauty completely overwhelm their likeability. Think of Halle Barre’s Catwoman, but not Scarlet Johansson’s Black Widow.

Data’s next vital quality is that his primary superpower, his intellect, is tempered and offset. Western audiences are put off by characters, as they are by real people, who “act smart” all the time. That’s why Yoda can’t conquer syntax and Spock can’t answer the question, “How do you feel?” until he gets back in touch with his humanity. It’s also why the most popular image of Einstein is the one in which he’s sticking out his tongue.

Data can do 60 trillion operations per second, but he can’t use contractions, and many simple human behaviors puzzle him. I think I first really thought he was going to work as a character when he got his fingers stuck in those Chinese handcuffs. He is thus both superhuman and childlike.

Next, over the course of the show’s seven seasons (not so much in the movies), Data grows up quite a bit by going through distinctly human ordeals. He deals with familiar life problems in his own different, but still recognizable, way. He learns he shouldn’t circle dining tables like a buzzard when people are eating. He learns he can’t have a successful romance without emotions (and the human woman learns the same thing, which is awesome).

Data’s semi-clone, Isaac, is currently doing the same thing on The Orville.

Finally, there is the big flaw. Superman has his kryptonite. Batman has his dark side. Banner doesn’t want to be Hulk. Wonder Woman is disrespected for being female. Dr. Strange’s hands still shake.

Data’s flaw (in the TV version) is that he wants to be human but doesn’t have emotions. In fact, when Lore gives Data some emotions, Data is almost destroyed by them.

So there we have it: four character traits that turn a potentially unlikeable Superman into your friendly pal who’s fun to be with: 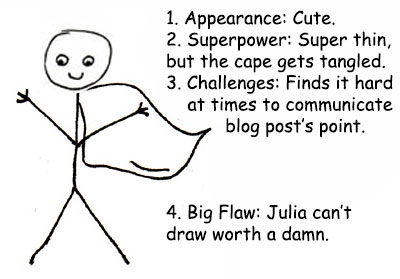