June 30, 2015 by ProofreadingPal in Writing Fiction

What makes a great story is up for debate, whether you’re writing for the general public or just yourself. After all, stories can be about anything, and stories are all around us: on TV, on our news apps, in our comic books, and on the lips of our friends.

But there is a secret to writing a great story that couldn’t be simpler.

When you sit down to write and wonder where to begin, remember that many writers have asked themselves this question, and their answers all boil down to the simple elegance of: “A person in a place has a problem.” If you think about it, that’s the bare bones of what a story needs.

To begin—and not feel overwhelmed—concentrate your brainstorming on a person (character), a place (setting), and a problem (conflict). The story is the resolution of this person’s problem. 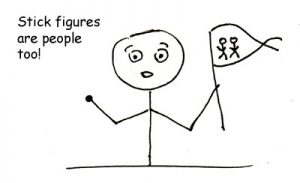 Characterization is arguably the most important part of stories. Readers today seek character-driven stories, which means that the plot of the story unfolds along with the reader’s understanding of the character. Stories driven by fancy plots or by frameworks built around really cool ideas may sound like fun, but they’re not going to cut it.

How do you create good characterization? The simplest, most honest, way is to give your character a strong want. Think of your favorite stories, and probably what you’ll notice is that the main character wants something, and very badly. Luke wants to destroy the Empire. ET wants to go home. Ripley wants to get away from that damn Alien.

You name it, a character has wanted it. Even after you get started, if you find your story is falling flat, go back and make sure you’ve clarified for your readers (and yourself) exactly what your characters want.

The role of the place varies, especially when it comes to different genres. Place often plays a pivotal role in fantasy, for example. Can you imagine Harry Potter without that wonderful school of wizardry? A stream-of-consciousness story takes place primarily inside the mind, and the mind is an interesting place indeed. More mainstream fiction might need a place that’s dull as dirt, yet comforting and familiar.

How can you write a great setting? People often say, “Write what you know.” So you could consider setting your story in places you’ve lived. But I think it’s more accurate to say, “Write what only you can write.”

There are a lot of people out there writing stories. One way you can differentiate yourself is to write something that nobody else can. For example, let’s say you’re a plumber who likes doing thought puzzles on the weekends. Is there some place you could imagine that would embody your talents and knowledge? Perhaps a civilization built on a byzantine subterranean system of pipes?

This is the story’s plot, so just remember to base the problem on the want.

Okay, I’ve got a character, Mario, who wants a hamburger. Mario is in a diner. How’s this for a plot? Mario buys a hamburger.

Well, this is by definition a story, but good stories are usually more complex than that.

So what can we do? Conventional wisdom is that plot is a series of escalating failures. Plot is the struggle (the conflict) to get what we want. You can’t make it too easy because, just like life, nothing is ever easy.

So let’s try this again: Mario wants a hamburger. He buys one, but then he goes to pay only to discover he’s left his wallet at home. What can he do? So Mario agrees to work off his hamburger in the kitchen. But it turns out Mario doesn’t know how to wash dishes, and he drops them. Now he has to pay for the dishes and the burger! What can he do now?

The story goes on from there. A strong plot would see Mario trying and failing yet getting closer and closer to paying off that hamburger.

There is much, much more to writing a great story. You need vivid descriptions; you need originality; you need good dialogue. But remember that the foundation you have made is strong: A person in a place has a problem.” The rest can count on that.