You’ve got a great topic, you’ve done your research: it’s time to write your paper. You’ve got a lot to say and a lot of evidence to support your argument, and now it’s up to you to make sure the way you express yourself allows your brilliant ideas to shine through.

Here at ProofreadingPal, an issue I’ve often seen muddying people’s arguments is incorrect use of transition words and phrases. These are things like “however,” “in other words,” and “for example.” These highlight the path from one idea to the next, making it easier for readers to understand the large and small arguments and how they relate to each other.

Now, bear in mind that transition words are not necessary when your ideas are flowing plainly from one to the next. They are necessary, however, when there’s a possibility the reader might not be able to follow along without a little help.

You can think of transition words and phrases as little signs saying, Connect these two ideas, Consider this before you consider that, or This idea shows you that last idea is actually wrong. And just like putting a yield sign where a stop sign should be may lead to a traffic accident, putting the wrong transition in your writing may result in your reader’s confusion.

There are many transition words and phrases out there. I’ll highlight some of the most common ones by the situation in which they may be used.

To show that the following idea provides proof or is an example of a point you’ve just explained, use for example, for instance, to illustrate, namely, such as, or in other words. To add to proof you’ve already provided, use in addition, moreover, furthermore, again, also, or similarly.

The weather in Antarctica is inhospitable to humans. For instance, the average temperature range throughout the year is -49ºF to -56ºF. Moreover, all available water is frozen.

Transitional words and phrases are useful when you are comparing two or more ideas. To begin a sentence that illustrates a similarity to a point you’ve already made, use indeed, in the same way, likewise, or in a similar fashion. To begin a sentence that illustrates a difference or a contradiction, use however, nevertheless, at the same time, or in contrast. You can also use on the one hand and on the other hand if you’ve got a pair of opposing ideas, but beware: you must use both. (Read more on that particular pairing).

Indeed, nearly 98 percent of the continent is covered by ice. Nevertheless, several species of penguin make Antarctica their home.

Showing Cause and Effect

To show that the following idea has been caused by something you’ve just mentioned, use as a consequence, consequently, so, as a result, therefore, thus, hence, for this reason, or accordingly. Be careful if you use consequently; it does not have the same meaning as subsequently, which is discussed below.

Conditions in Antarctica aren’t easy for penguins either. Consequently, Antarctic penguins have developed several adaptations for life there.

Writers often need to discuss events or steps in a specified order. Use these words to transition from one event, step, or idea to the next: first of all, first, second, third, next, last, finally. If you use first of all, continue with second (not second of all). If you are only writing about two steps, you may use subsequently or next. If you would like to express that one thing occurred at the same time as another, use meanwhile, in the meantime, or simultaneously. You may use firstly, secondly, and so on, if you like, but many writers and style guides recommend using the shorter versions. No matter what, be consistent throughout your list. 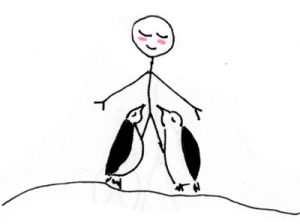 First, they move in ways such as tobogganing and waddling that are efficient in the cold. Second, they fluff their feathers to trap air for insulation. Finally, during very cold spells they huddle together to trap heat and help keep each other warm.

You’ve reached the end of an argument in your paper. Useful transitions indicating you are about to begin a concluding sentence or paragraph include in conclusion, finally, in sum, or to summarize.

In sum, despite the difficulties of living in the frozen world of Antarctica, it is possible for some well-adapted creatures like penguins to thrive.

Using transitions effectively can be challenging, but it will improve your writing. Moreover, once you get used to using these handy words and expressions, you may find your ideas flowing more easily, as the transitions begin to guide your thinking as well as your readers’ eventual comprehension.