July 31, 2017 by ProofreadingPal in Writing Guides

I was tempted to call this “Always Avoid Absolutes,” but it made my brain hurt. 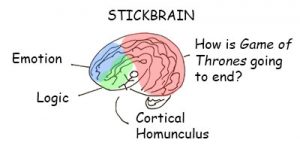 In conversation, we throw around words like “never,” “unique,” “always,” and “completely” and think little of it. Wrong or right, they’re just words we use to emphasize our points. (Thus, the constant misuse of “literally,” which people use as another word for “really” or “very” when it actually means “in nonfigurative language.”)

And truly, when we’re talking to each other and everyone knows what we mean, who cares?

But when we’re writing a paper, report, or anything else we want other people to take seriously, we have to respect the true meaning of these words: they are absolutes. As such, they can kill an otherwise sound argument, distract the reader from the point you’re making, and make you sound juvenile.

The problem with absolutes is that they are almost always impossible to prove. Consider the following, which you might hear people say and which are easy to disprove if taken seriously:

No one likes that song. (Someone must if they’re singing it and others are buying it.)
Everything she does is mean. (Would that include breathing?)
This team is the best team in the history of teams! (Doubtful.)

All that is needed to overthrow an absolute is a single exception. If I can find one person who likes that song, one thing she does that isn’t mean, or one team more impressive, the statement is disproven.

This issue with absolutes is the reason behind why you can never (yes, never) prove a negative. Consider:

Well, you can’t. No one could, which makes it a lousy argument and the reason this sort of questioning is considered illegal in most (alas, not all) countries.

This issue is also the reason you can never (yes, never) state with 100 percent certainty that something will happen in the future. Consider:

We surveyed a hundred people, and they all said they liked this movie. The movie will be a big hit.

Well, maybe. And maybe those hundred people have something in common that the rest of the public won’t. Maybe they were lying. Maybe the movie studio will be sued and shut down, and the movie will never be released. Maybe tomorrow we’ll all wake up as vampires who don’t like movies. It’s unlikely, sure, but you can’t prove it won’t happen.

So even though you may agree with the following and would be fine saying such things to friends, you should recognize that these statements are not OK when you’re making a serious point:

No one likes a quitter.
Everyone wants to be rich and famous.
College is always a good idea.

There’s no way to prove these statements are correct (and about a thousand ways to demonstrate they may be incorrect), so you should avoid them.

But you may say, people will know I don’t mean it all that seriously.

But I would say back, even if that were true, it’s still distracting. Saying something is “never” this way or that “everyone” does something invites, even dares, readers to find exceptions. Instead of concentrating on your point, they may be sitting there thinking, “Well, I know this guy from college who used to do that,” or “Hey, there are 7 million people in the world, you know.”

So why risk turning your readers’ attention away from your argument? If you don’t truly mean the absolute, don’t use it.

Because of the bad logic and short-sightedness of most unqualified absolutes, using them makes writers look like toddlers who haven’t learned there’s a world beyond their own experiences. You’re probably used to how ill-informed such statements as these sound:

In the old days, baseball players all played for the love of the game. Now all they want is money.
Every woman wants to lose weight.
Listening to Mozart when you study will make you smarter.

Despite the attempt to sound more “scholarly,” the following revisions retain this ill-informed tone:

A recent survey of professional baseball players found that their primary goals are economic.
Our readers wrote in, and it’s official: if you’re a woman, you want to lose weight.
This case study found you will do better on tests if you study while listening to Mozart.

And now, simply by avoiding absolutes to acknowledge awareness that there are (almost) always exceptions, listen to how the sentences are improved:

A recent survey of professional baseball players found that a high majority (87%) listed “financial reward” as their primary motivation for choosing their career.
From the letters we’ve received, it’s clear many women are looking for ways to lose weight.
This case study of students found that almost all of them did better on tests if they studied while listening to Mozart.

So Can I Never Use an Absolute?

There are exceptions to avoiding absolutes, just like with everything else. Like I said, you cannot prove a negative or ever know with certainty what will happen in the future. For more examples, human beings do seem to be unique, even when they share DNA, and absolute zero degrees always means it’s colder than any other temperature (at least, according to how we know temperature works).

Primarily, acceptable absolutes are found in scientific papers because what’s in them is understood to be true “so far” and in faith-based discussion (e.g., We’re all God’s children.) because, well, it’s faith, and thus doesn’t require proof.

So if you don’t mean it absolutely, qualify it!