March 18, 2017 by ProofreadingPal in Writing Guides

When it’s time to check out at the grocery store and there are seven items in your basket, do you look for the “Ten Items or Less” line? Or is it “Ten Items or Fewer”?

Expressions of comparison and contrast are a vital part of language. It’s useful to be able to set things side by side and describe how they stack up in terms of size, number, or degree. English has multiple ways to express such relationships. We use them in everyday speech without much thought as to which is most appropriate, relying on the listener to deduce our meaning from our shared frame of reference.

We know that “Ten Items or Less” sign really should be “or Fewer,” but the dodgy grammar doesn’t actually change our behavior; we heed the sign’s command, however imperfectly expressed. 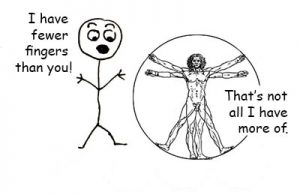 In formal writing, especially academic writing, we must use language more precisely. “Less” and “fewer” have noticeably different connotations, and in an academic context, choosing the wrong one may interfere with your ability to communicate, especially with a reader who’s not feeling terribly generous.

In the interest of clarity, then, let’s take a couple of columns to look at expressions of comparison that cause trouble for many writers.

In general, the word you choose to express relative scale will depend on what, exactly, you are describing.

Let’s say you have two piles of sand, one big and one small. The smaller pile has less sand. “Sand” here is a mass noun; it can vary in abundance, but we don’t express that variance in terms of units. Abstract nouns tend to be uncountable too (e.g., “Switzerland has less corruption than Russia”).

That said, many mass or abstract nouns can also be expressed as countable things or statistics. Those two piles of sand are each made up of individual grains, and you can count those grains if you’re patient and have a good microscope. (You can also weigh the sand, if you insist.) So the small pile has less sand and fewer grains of sand; it weighs less and comprises fewer pounds. Similarly, Swiss citizens report fewer incidents per capita of bribery than Russian citizens.

Finally, when talking about numbers or percentages, use “high” and “low” (or “large” and “small”), whether you give the actual figures or not. This sand-pile contains a smaller number of grains than the other and has a lower total weight. A higher percentage of Russian officials than Swiss are corrupt.

Note that the sample statements all say functionally the same thing, but with different shades of meaning. Which you choose will depend upon your focus—that is, upon the answer to the question, “Why do we care about these two piles of sand, anyway?”

From comparisons of degree and number, we move to comparisons of kind and to the question of the appropriate preposition. Consider this phrase: “The situation in Syria is obviously quite different [from or than] the one in Iraq.” Which is correct?

We generally only see the construction “different than” in works using UK-style English. It’s fairly common even among educated speakers and appears to be part of the house style of many respectable publications. Which is a pity because it is plainly and flagrantly wrong.

“Different” is a participial adjective, meaning it’s derived from a verb, namely, “differ.” Indeed, in most cases you could use “differing” as a synonym for “different.” And differ’s constant companion, its prepositional helper-word, is from. One thing invariably differs from another: it never differs than another. By simple logical extension, “different from” is the sole correct option.

[Editor’s question: Hey, I have a little thing I do with hand gestures to show why this is true. You want me to add it?]

We occasionally see “different to,” which is also completely wrong, but at least has some thought behind it; it’s a bogus parallel construction with “similar to.” But just as “similar” and “different” are opposites, so too their prepositions.

Next time, we’ll look at the uses of “between” and “among” and consider the case of a common adjective for which there is literally no comparison. See you then!