Control Your Tone with Your Mood

November 2, 2017 by ProofreadingPal in Writing Guides

There’s lots of advice out there about establishing the right tone for a business letter, office memo, or email to a colleague that ranges from basic common sense (e.g., don’t swear.) to holistic wisdom (e.g., pause and think before you hit “send.”).

But how about a more mechanical approach? When it comes to the real nuts and bolts of writing, you’ll find it easier to control your tone by paying attention to your mood.

Now, I don’t mean your personal mood, as in not writing when you’re angry or texting when you’re drunk (though that is sound advice). I’m talking about the mood we establish with our words. Here’s a little Merriam-Webster to get us started.

Tone: style or manner of expression in speaking or writing
Mood: the expression of a conscious state of mind or predominant emotion

In other words: tone is how we sound, and mood is how we make our reader feel.

Say you and I are getting married (but we’ve decided to hold off on kids for now). We want the traditional church wedding, impressing everyone with our solemn love and commitment. So we have the minister say:

Dearly beloved, we are gathered here today to witness the union of Julia and [your name here] in holy matrimony, which is an honorable estate not to be entered into unadvisedly or lightly, but reverently and soberly.

When friends of ours get married, however, they decide they want everyone to relax and have a fun time. They’re holding the ceremony at a venue with an open bar and a taco truck. They have the minister say:

It’s wonderful to be here to watch Kevin and Juanita get married, isn’t it? What a great day to enjoy watching these two decide to share their lives together.

The same principle of choosing the appropriate script applies when you have to tell your friend you found their dead pet in your yard (e.g., don’t laugh) or when you want to console a friend who has cancer (e.g., don’t tell them about your other friend who died a horrible death from cancer two years ago).

Even more than conveying information, the most impactful aspect of communication is evoking emotions in the audience. We do this instinctively when talking to little children or a dog. Snarling an angry “I love you” or “Who’s a good boy, dammit?” isn’t going to give the audience happy feelings.

Perhaps it’s because we lose the face-to-face feedback when we write, but all too often we forget to think about what our readers are going to feel. We’re too busy concentrating on creating an authoritative tone, businesslike attitude, or supportive voice. We’re thinking about how we sound, not the effect we’re going to have.

Ignore Mood at Your Peril

Let me share a story about one of the worst communicators I’ve ever worked for. He oversaw four different offices with a variety of high-maintenance people. Many times over the years, something incredibly inappropriate, poorly planned, badly executed, or just downright salacious would occur. His response always involved sending a mass email to the staff with behavioral instructions.

For example, in one incident (that still makes me feel a little nauseated), an assistant knocked on a door, got no answer, and walked into an office to be confronted with an image on a large computer screen showing two people in an act that I think is still illegal in some red states.

Now, I would never have known about this, except the boss sent the following email to the staff:

Please remember that your offices are not private dwellings. Do not expect a closed office door to mean that other members of the staff will not enter your office.

The tone of this email, taken out of context, is boss-like and authoritative, but in context, this is just a major fail. If he had thought about mood, he might have realized the emotion he was going to evoke was not obedient solemnity, but massive curiosity. Why were we suddenly being told not to treat our offices like our teenage son’s bedroom? 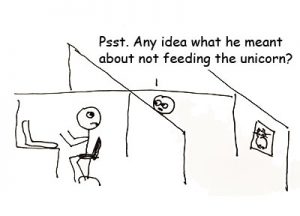 Naturally, news of what happened had covered four offices and two states by lunchtime.

Repeatedly, he’d send some stern email that would leave us with a frantic desire to know what was going on. My favorite email, though, came not long before I left. It told us all to stop gossiping so much.

Now, it may sound here like I’m just telling you to “remember your audience” when you write, which is also sound advice. But thinking about our audience involves knowing them as people. Watching our mood does not.

Instead, think about your situation and the emotional response you want to evoke in people who share your general understanding of how human beings behave. It’s not a question of what you want them to do; it’s what you want them to feel. In the case above, Mr. Boss of the Year wanted people to feel caution about their offices, not to spread news of an office incident, in which case, of course, he shouldn’t have written the mysterious mass email at all.

So if you’re writing a memo reminding everyone to come to a meeting, be clear and authoritative, but also think about what you want the readers to experience emotionally to get them to behave the way you want. In this case, pique their curiosity by suggesting with your tone that something new and important will be discussed at this meeting.

And remember, this isn’t a new skill. You use it in conversation by watching the other person’s face. You just have to keep doing it when the other person isn’t actually there.