February 1, 2018 by ProofreadingPal in Writing Guides

Everyone has to start somewhere, and while it can be scary to take the plunge into writing, editing, revising, and publishing your first novel, it can also be an incredibly worthwhile adventure.

But even skilled writers who are used to cranking out journal articles, blog posts, white papers, reports, and memos can struggle when it comes to finding their rhythm as a fiction writer.

In my years as an acquiring editor, I’ve seen a few particular issues come up again and again.

In my next few posts, we’ll take a look at some of these common goofs and how you can fix them so your fiction stands out in the best way possible.

You’ve created an amazing cast of characters, and you want to show us their unique perspectives on the events unfolding in your book.

Everyone perceives the world differently, and you’re just positive that letting readers experience the action from these different points of view is going to add layers of depth and nuance to the narrative. 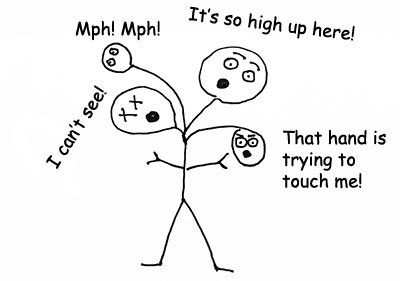 So while your manuscript starts out from the point of view of Allister, whom your readers probably assume will be your main character, about three paragraphs in, you switch to the perspective of Persephone, his sister, who’s standing next to him.

Wait, who’s the main character here, if not of the book, at least of this section? Is it Allister or Persephone? Who is your reader supposed to be identifying with, and what’s happening in the scene while you switch POV?

Look at it this way and you can see that point-of-view issues (headhopping) are incredibly distracting for readers. Bouncing from one character’s thoughts into another’s with no transition is jarring, and it can prevent the reader from fully identifying with the perspective character at the time.

At best, it breaks the rhythm and flow of your narrative; at worst, it throws the reader off completely, making it so they’re not sure who’s telling the story or what they’re supposed to be following along with.

A Powerful and Dangerous Tool

It’s okay to tell a story from the perspective of more than one character, and this technique can be incredibly effective in fiction. Just look at how many different characters take center stage in A Song of Ice and Fire/Game of Thrones.

But notice too how each scene or episode focuses tightly on a single viewpoint; we’re not jumping from one character to the next to the next in the space of a single brief moment.

This is where potentially powerful perspective shifts become egregious or distracting headhopping.

All too often, new fiction writers get excited by the different perspectives their characters have to offer and jump between them in a single scene. This is intensely disconcerting—whose head are we in now? What are they thinking? Why did we leave the other character?—and should be avoided.

How to Do It Right

So, switching perspectives can be interesting and allow you to tell the story from different viewpoints as well as provide a way into the action when one character is waiting around while another one elsewhere is advancing the plot. But jumping between perspectives in one scene is confusing and irritating. How the heck do you manage?

Believe it or not, the answer’s simple: If you have to switch perspectives, wait until you start a new scene, then open in the new character’s mind.

The pacing of your novel should include some gaps in the action, pauses where nothing happens as you transition to a new day, time, location, or situation. Often, these will be chapter breaks; sometimes they’ll be scene breaks within a chapter.

They are the time to swap perspectives. Because there’s a break in the action, you can cleanly end your time in one character’s head and pick back up in a new one.

This allows your readers a chance to breathe and acclimate to the new perspective or voice, avoiding confusion about just whose head they’re in now.

So keep a close eye on whose perspective you’re using as you write your new novel. Are you taking advantage of natural breaks in the story to switch viewpoints, or bouncing all over the place between characters?

Give yourself, and your readers, the time to really inhabit one character at a time, and before you know it, you’ll open up new worlds of character and plot development that will take your writing to engaging new levels.