How and When to Write Complaint Letters

September 26, 2015 by ProofreadingPal in Writing Guides

At some point, you will have a bad experience with customer service. Some employee in a restaurant, airport, or retail store will botch a simple task, causing you no end of inconvenience and embarrassment. You will be moved to write to upper management to express your displeasure. But before you write that letter and send it to me to be proofread, let me offer you a word of advice.

That word is: Don’t.

If you have been subjected to a genuine injustice, such as not getting your merchandise, or if your experience indicates an institutional problem that needs to be corrected, such as illegal, unethical, or reckless action by the company, then you deserve to be heard.

Unfortunately, most complaints that cross my desk leave me sympathizing with the put-upon employee rather than the customer, even though the customer is paying me for my services. No matter how plainly he may see himself as the victim, there’s something about the act of complaining that often makes the customer, even in his own account of events, seem spoiled and unreasonable, something no amount of editing can fix (even awesome Proofreadingpal.com editing).

So if you need to blow off steam, your best bet is probably telling your story to sympathetic friends and family.

However, if you want action to result from your logical, substantial complaint, here are a few tips to help craft your message.

Remain polite. To achieve a positive outcome, it’s important to keep your perspective. Remember, nobody sets out to provide poor service; most bad experiences arise from a mismatch between customer expectations and employees who unknowingly promise more than they can deliver. Don’t ascribe to malice what can be adequately explained by ignorance. Don’t judge character. Focus on actions. Don’t say in your complaint, “The cashier is a low-life jerk,” but rather, “The cashier spoke rudely to me.”

Know the specifics (but don’t overdo it). When describing your experience, include details that will help management verify your account, such as the date, time, and location of the incident and the names of any parties involved. But keep your story brief and direct. Don’t provide a word-for-word transcript of your conversation, even if you have it on video.

Don’t overshare. Focus only on what the company could have prevented. Be wary of including unflattering details, lest you undercut your own case.

I once proofed a letter from a customer to an electronics store who failed to have his new laptop ready when promised. But instead of focusing on that error by the store, he told all about how he had already purchased and returned the same machine from two different stores earlier that day, angling for a better deal. Page after page, he detailed his many woes—a migraine, a hungry family waiting in the car, an overseas trip scheduled for the next day—none of which was within the store’s control. He climaxed by recounting how he trespassed in the store after hours! Not the way to garner sympathy. 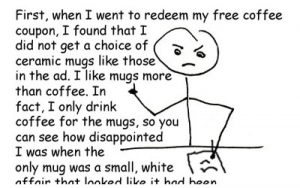 Have an endgame in mind. The first response of the person reading your letter is likely to be: “What do you want me to do about it?” Anticipate the question. If you believe you are owed an apology, say so. If you think you deserve to be compensated for your time and trouble, let them know. If you think there’s a pattern of discrimination or unethical behavior that should be addressed, suggest a change in policy.

Keep your expectations reasonable. There will probably be no monetary compensation without legal action (see below). More likely you’ll be offered a voucher or discount of some kind. And don’t demand that someone be fired. It seems petty, and it personalizes what may very well be a problem of policy.

If you have grounds for a lawsuit, file one, but don’t threaten. The vast majority of disgruntled customers who threaten legal action never follow up, and companies know it. Companies don’t pay monetary damages in response to the threat of a lawsuit—only in response to the thing itself. There’s no reason for a company to take such a threat seriously, so don’t waste your time posturing. Lawyer up right away.

With these solid goals and expectations, you can write a letter of complaint with the best chance of being heard and eliciting a desirable response.