Place Order Get Instant Quote Free Sample
Home  /  Writing Guides   /   How Many Spaces After a Period?

How Many Spaces After a Period?

July 1, 2016 by ProofreadingPal in Writing Guides

I’ve written a little about how the limitations of an obsolete technology (i.e., the mechanical typewriter) have continued to shape the way people work with text. This influence shows up mainly in individual habits by people who don’t know the rules have changed. And there’s no harder habit to break than one that was once necessary, but no longer is.

Typing two blank spaces at the end of every sentence is one such habit. Lots of people still do it because it used to be a rule, and that’s how they were taught. And they, in turn, pass the “rule” along to the next generation of writers. But for most kinds of writing, the two-space habit is, in fact, no longer the rule.

Now, all rules are arbitrary to an extent, but they often begin as an attempt to address some practical problem. To understand why the two-space rule was adopted and then discarded, we need to look at the problem it was designed to address: the readability of printed materials.

Some trace the origin of the two-space rule to typewriters’ use of monospaced fonts, which are so named because every character—be it a tall, skinny letter like a capital “I” or a short, fat letter like a lowercase “m”—occupies a space of equal width. Under such limitations, a long paragraph can easily degenerate into an undifferentiated wall of text; two wide spaces between each sentence functioned as a visual marker, making manuscripts more readable. 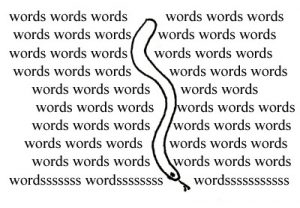 That sounds plausible. But wide spacing between sentences was fashionable in printed materials for centuries before the invention of the typewriter and as far back as Gutenberg’s first printing press. Printing with movable type was an unforgiving, labor-intensive process. The results had to be not only legible but also aesthetically pleasing.

Wide sentence spacing allowed typesetters a bit of leeway to control the spacing of individual lines, the better to avoid distracting “rivers” of white space that would sometimes snake down the length of the page. The practice persisted even after the advent of mechanical or “hot metal” typesetting in the twentieth century.

Narrower spacing in printed materials came in the 1960s as advances in offset printing allowed for denser layouts with no loss in readability. But typesetters were still working from hard copies, which writers still produced on typewriters or low-resolution dot matrix printers. And so the two-space convention still held for manuscripts, and it doubtless helped many a bleary-eyed editor.

Today, even consumer-grade software can handle layout and compositing functions on the fly. More work is submitted electronically, eliminating the need for hard copies in the first place; we simply key in the work just as it will be printed, with no typesetting necessary.

In recent decades, news outlets and academic consortia have been steadily eliminating the two-space requirement from their style manuals. The latest editions of the Associated Press style book, the Chicago Manual of Style, and the U.S. Government Printing Office’s guidelines all mandate a single space between sentences. So do the style manual of the Modern Language Association (MLA) and the Manual for Writers of Research Papers, Theses, and Dissertations (a.k.a. Turabian style). The publication guidelines of the Council of Science Editors (CSE) make no formal recommendation one way or the other, deferring instead to the style sheet of the particular publication or university, which usually means a single space.

There’s only one major holdout among stylebooks in common use in the United States, but it’s a big one: the Publications Manual of the American Psychological Association. APA style is widely used in the social sciences and humanities, and the APA style book has actually gone back and forth on the issue. In its most recent version, the sixth edition (2010), the APA manual recommends two spaces between sentences for draft manuscripts. But even the APA acknowledges that the single space is standard for professional publications.

If you’re writing for a class or a publication, you should always check the style guidelines (if any) provided by your professor or editor. Failing that, you can feel confident in defaulting to a single space between sentences. While there are some circumstances where it is proper to use two spaces after a sentence, it is rarely actually incorrect to use just one.