Hyphens in Numbers, Prefixes, and Modifiers

July 20, 2016 by ProofreadingPal in Writing Guides

Last time, I wrote many helpful things about using hyphens in compound words.

In today’s post, I look at some specific grammatical constructions and how hyphens are used in them.

Many numbers are written with hyphens. While in some style guides numbers above nine are done with numerals, others insist on writing them out. (In all major styles, numbers that start sentences are always written out.)

If you are following the Chicago Manual of Style’s general rule or the MLA, use a hyphen to link numbers consisting of combinations of tens and ones (fifty-nine) but not in numbers in the hundreds (two hundred), thousands, millions, and so on.

Use a hyphen in fractions (three-fourths of a pizza) but only when the fraction comes before the verb (The pizza was cut into three thirds).

Hyphens are also used when describing ages—whether you’re writing out the number or or using numerals—both when the age is the noun (Give this to the five-year-old) and when the age is a modifier before the noun (Look at the cute 6-year-old girl). After the noun, no hyphens are required (My date acted like he was twelve years old).

As I noted in my previous post, most prefixes get added onto their base words without a hyphen. However, there are certain exceptions when you do use a hyphen with a prefix: 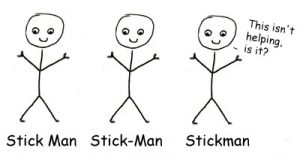 When the words in front of nouns are already modifiers (adverbs or adjectives), no hyphen is used (wrongly accused woman, smartly dressed toddler).

However, there is a chance for confusion when the modifier can be either an adverb or adjective depending on the situation (e.g., high, fast, well, little). Then you just use the rule to hyphenate when it’s a modifier before the noun but not after.

When using several prefixes with just one base noun, the suspended hyphen (i.e., dangling hyphen) is useful.

As always, though, don’t use the suspended hyphen if will be confusing to the reader.