Italics and Quotes for Titles: A Guide

December 3, 2018 by ProofreadingPal in Writing Guides

We’ve all been there. We’re writing along, solidly in the groove, when the Formatting Wall appears around a seemingly safe corner. Abruptly halting, you wonder: How the heck am I supposed to format this title?

Titles come in many shapes and sizes, but they all have rules for formatting that you master with just a little work. Italics, quotes, even plain text: they all apply in certain situations. How do you know which is which?

Use italics to set apart the title of a standalone work or a “container work”—that is, a work that has other, smaller works within it. Examples of titles that should be italicized include:

My brother insists that Fists of Fury is the best movie ever made.

Have you read the latest issue of Scottish Archaeology Journal? It’s riveting!

I know it’s not a popular opinion, but I think La Boheme, by Giacomo Puccini, is an overrated opera.

I can’t believe the TV show Supernatural is in its fourteenth season.

Why do I have to read Hemingway’s “A Clean, Well-Lighted Place” in every English class?

I can’t get the tune to “Amazing Grace” out of my head.

Every time I think of William Carlos Williams, I get irritated. “This Is Just to Say” is a beautiful poem, but it reminds me of my terrible roommate.

And so you can easily demonstrate which is the work “inside” the other work with proper punctuation:

My favorite episode of Doctor Who is “Blink,” without a doubt.

I love everything by the Beatles, but I think “I Should Have Known Better” from A Hard Day’s Night is an underrated classic.

Modern Construction Envelopes is a very useful reference in general, but chapter 12, “Fabric Roofs,” is groundbreaking.

The highlight of the recent exhibition, Pin-Ups: Toulouse-Lautrec and the Art of Celebrity, had to be Steinlen’s “Cabaret du Chat Noir.” It was fascinating to see in person what I’ve seen on a wall in every undergraduate dorm across the country.

There are, of course, exceptions. A few types of publications and creative works stand a little apart from the general categories of “standalone/wrapper work” and “subsidiary work.”

For example, dissertations are typically standalone documents, but their titles go in quotation marks.

The best dissertation ever written is “The False Optic: Poisoned Fictional Objects in Renaissance Revenge Tragedies.” 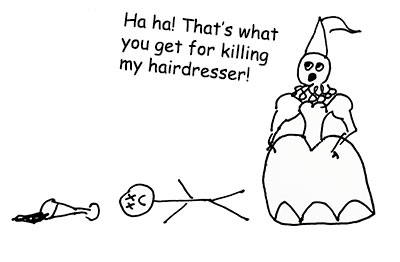 I’m always moved to tears by Dvorak’s Symphony No. 9 in E minor, “From the New World.”

A relatively easy way to remember these rules involves whether a work is “big” or “little.” If it’s a grand, sweeping thing that might contain other bits within it, like a book or journal, then use italics. If it’s a smaller thing that might itself be contained within something else, like a newspaper article or work of art in an exhibition, then it goes in quotes.

Oh, and don’t forget to capitalize those titles correctly, in addition to formatting them right.