August 5, 2016 by ProofreadingPal in Writing Guides

The month of July is winding down as I write this, and this has been a month for contemplating the consequences of a nation’s separation from another geographical and political entity. Last month, the United Kingdom held a referendum paving the way for its withdrawal from the European Union, and the United States commemorated its independence from the bonds of a former empire administered from that same United Kingdom. In many places, the latter anniversary was celebrated with a lust chorus of Lee Greenwood’s anthem, “God Bless the—”

Well, wait a minute. Is it “God Bless the U.S.A.” with periods or “God Bless the USA” without? Is there a rule? Oh, you probably have a preference, but how do you know you’re right? 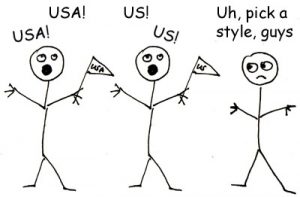 The answer, somewhat unhelpfully, is that it depends. Periods vs. no periods isn’t actually a question of grammar, but of something far trickier: style. And while the rules of grammar are a product of consensus, based on observation and description of the ever-changing ways in which people use the language, the rules of style derive purely from an appeal to authority.

These rules do not arise organically but are handed down by self-appointed arbiters usually speaking for an affiliation of publishers. The Chicago Manual of Style (CMS), for instance, serves as the argument-ender for hundreds of magazines and newspapers; the Associated Press Stylebook serves the same role for hundreds more; the American Psychological Association’s Publications Manual is the last word for a host of academic journals in the sciences, and the Modern Language Association Handbook serves journals in the humanities. The rules in these guidebooks are often arbitrary, but they are internally consistent, and that’s all they really need to be.

At ProofreadingPal, we edit for both grammar and style. Most of our proofreaders are well-versed in several style guides and our clients can ask for whatever they like, but we use the CMS as our default.

The CMS takes many definitive stands, but surprisingly it largely punts on the USA vs. U.S.A. controversy. Section 10.33 of the 16th edition recommends spelling out “United States” when using the country’s name as a noun (e.g., “Walmart is a retailer with stores across the United States.”). For use as an adjective, however, section 10.4 specifies “US” without periods or the “A” (e.g., “The US retailer Walmart is expanding its operations in Canada.”). The only answer to the “USA” issue come by inference: CMS-compliant patriots can now belt out “God Bless the USA” unencumbered by any notional full stops.

Interestingly, before adopting the 16th edition in 2010—and this points up the arbitrary nature of style guides—the CMS for many years insisted on periods in “U.S.” but not in the abbreviations for any other country. (As of this writing, the APA and MLA still do this, but only when “U.S.” is used as an adjective.)

In any case, the style books say not to use “America” or “American.” Although we may refer to ourselves as such in everyday speech, we avoid this in formal writing to avoid confusion, especially in consideration of an international readership. Brazilians and Argentinians have just as much reason to think of themselves as “American” as do US citizens, after all. That being said, “American” may be used as an adjective in the body of a text after the origin of the object has been sufficiently established (e.g., “The weak US dollar has led to rising popularity for American brands overseas.). “United States,” though, remains the preferred noun form for most formal writing. (Sorry, Kate Smith.)

As with all stylistic matters, consistency is key. The CMS’s adoption of “US” grew from its longstanding preference for two-letter postal-style codes for the individual states. These are used less frequently, though: the spelled-out forms serve as both adjectives and nouns, with the abbreviation reserved for specific locations and political designations. Examples include:

Adherence to any particular style guide is a sort of social contract; binding ourselves to a shared set of rules may not solve every problem of communication, but at least we can know what to expect.