What’s the difference between a run-on sentence and a long sentence?

Why are sentences in old books often much longer than sentences today?

Just how long should sentences be?

Sentences are pretty simple things. With a very few exceptions, sentences have to have a subject (a thing) and a verb (an action taken by the subject). Sentences can have a lot of other things too, like objects and indirect objects and dependent phrases, and so on. But when talking about run-ons, the important things are subjects and verbs.

It would be so easy to avoid run-ons if the rule were that a sentence can have only one subject and one verb. Thus:

She smiled at her sweetie.

is a sentence, and:

She smiled at her sweetie, he smiled back.

But while these examples are correctly labeled, the suggested rule is too simple. Sentences can have many subjects and verbs and not be run-ons as long as all the parts of the sentence are correctly linked. That is, as long as the logical relationship between one subject-verb set and another is clear, you don’t have a run-on. Thus:

She smiled at her sweetie, and he smiled back.

She smiled at her sweetie because she knew he would smile back.

She smiled at her sweetie, but he didn’t smile back.

are all not run-ons. The first one gives us a sequence of events, the second an explanation of cause, and the third a sequence that suggests he’s cheating on her or watching the game. 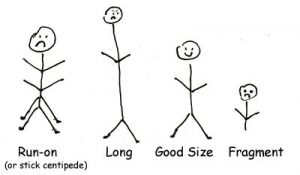 So a sentence, however long, isn’t a run-on as long as all the parts have the words and punctuation necessary to map out just what part of the sentence goes with what. Thus, this bit from John Ruskin in The Stones of Venice:

It is as if the soul of man, itself severed from the root of its health, and about to fall into corruption, lost the perception of life in all things around it; and could no more distinguish the wave of the strong branches, full of muscular strength and sanguine circulation, from the lax bending of a broken cord, nor the sinuousness of the edge of the leaf, crushed into deep folds by the expansion of its living growth, from the wrinkled contraction of its decay.

is definitely long but not a run-on.

Why Sentences Are Generally Shorter Now

We like to receive our information more quickly than we used to, and short sentences help quick reading. Thus, a contemporary editor (working for, say, ProofreadingPal) might well suggest:

It is as if the soul of man, itself severed from the root of its health and about to fall into corruption, lost the perception of life in all things around it. Thus, while the wave of strong branches is full of muscular strength and sanguine circulation, the soul could not distinguish it from the lax bending of a broken cord. It would be equally clueless about the difference between the sinuousness of the edge of the leaf when crushed into deep folds by the expansion of its living growth from when it is wrinkled by the contraction of its decay.

So, while there is nothing grammatically incorrect about a long sentence, it’s usually a good idea to use shorter sentences to get your points across to a contemporary audience.

So How Long Should a Sentence Be?

Length is easy to measure when you stop thinking about the number of words and concentrate on the number of ideas. People want their ideas in one shot, one sentence, but an idea isn’t a data byte. The sentence should be long enough to give the idea in a nicely coherent piece. Make the sentences too short, and you’ve got something that’s easy to read but annoying and disjointed (though not fragments, which have an incomplete subject-verb set). Thus:

Rodney and Joan are friends. They go on adventures together. Sometimes they explore other planets. They have great fun. Sometimes aliens attack them. They kill the aliens. They don’t like that. They are defending themselves.

is grammatically correct and certainly not confusing, but note that the relationships between the data bytes aren’t clear. So, to put it together in good-sized sentences, we look it over and see there are two major ideas:

Rodney and Joan have great fun exploring other planets together. However, when aliens attack them, they have to defend themselves, even though they don’t like killing.

So, a run-on can be as short as four words (subject-verb x 2), and a grammatically correct sentence can be as long as 4,391 words (Ulysses, by James Joyce, that sadist). The Goldilocks “just right” principle is that all the pieces are properly linked to convey a coherent idea. As with so much in grammar, it’s often a judgment call.