Most of us stop thinking much about sentence structure once we leave English class. We know we need a subject and a verb and to avoid run-ons. If we think about structure at all, it’s about not sounding like Yoda:

But there’s so much more.

My two tips today deal with the most common mistakes in sentence structure I see here at ProofreadingPal.com.

My tips for Part 2 will show how to use structure to elevate your writing beyond the competent to the compelling.

But let’s start with avoiding mistakes.

Parallelism has a lot of syllables, but it just refers to the way you get the bits of your sentence to line up properly when you are offering a list. It has two rules:

I need to buy eggs, milk, cheese, and some hand cream.

This has good parallelism. The items are all nouns, and they all refer back to the same anchor word, “buy.”

Notice that the modifier “some” does nothing to change the type of thing on the list (noun) or interfere with referring back to the anchor “buy.” So, the following also has good parallelism:

I need to buy a dozen brown eggs, a gallon of that organic whole milk with extra vitamin D, cheddar cheese, and some hand cream that isn’t greasy.

So far, so simple. Now let’s look at some bad parallelism:

I need to buy eggs, milk, cheese, and make sure everyone sees me.

This breaks both rules. “Make sure everyone sees me” isn’t a noun, and it doesn’t refer back to the anchor “buy.” The last entry actually reads:

I need to buy make sure everyone sees me.

Once spotted, this is easily fixed.

My true love smiled at me, held my hand, and then we walked up the road. (bad)

Notice here the items in the sequence are the same (actions), but the last item does not refer back to the anchor “love.” Again, the fix is easy enough:

See if you can spot this one on your own:

I put on a cute pair of shorts, my favorite tank, flip-flops, and brought a hat just in case I needed to shade my face.

This mistake is somewhat related to bad parallelism because it deals with the idea that a sentence has a sequence, but instead of having an anchor word, it has a timeline.

When reporting a series of events in chronological order, the structure needs to reflect that order. Take the following actions: 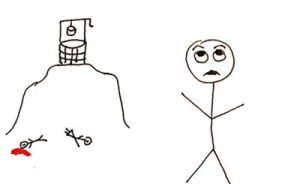 Jack and Jill went up the hill to get some water.
Jack fell down the hill.
Jack hurt his head.
Jill fell down after Jack did.

Now put them together in a sentence (with help from a semi-colon):

Jack and Jill went up the hill to fetch a pail of water; Jack fell down and broke his crown, and Jill came tumbling after.

The timing of each action is nice and clear. But look at this sentence:

Pulling the hostage up against his chest, the perp shoved the gun to the man’s forehead and shouted, “I swear, I’ll kill him!”

After pulling the hostage up against his chest, the perp shoved the gun to the man’s forehead and shouted, “I swear, I’ll kill him!”

Here’s a bad timeline I read not long ago in a set of assembly instructions:

Some readers might argue that they can figure out what’s going on despite bad sentence structure, but good writers don’t make readers do that kind of work. Good writing reads effortlessly (unless you’re James Joyce or something).

If thinking about my cursing out that rotating crossbar doesn’t give you enough motivation to write clearly, try this one:

The boss went over many workers’ concerns about their health-care plans, made several promises, and then left.

What, exactly, did this boss make promises about? If this were my boss, I’d want it to read:

The boss went over many workers’ concerns about their health care plans while making several promises, and then left.

Keep the order clear to keep the meaning clear.

Next time, we’ll discuss two uses of sentence structure that go beyond clarity.