US vs. UK English Grammar

October 29, 2015 by ProofreadingPal in Writing Guides

We know there are many word differences between American and British English (truck = lorry, toilet = loo, rubber = condom or eraser—how do the Brits know which is which?!), but less well known is that there are a few key grammatical and spelling differences between US and UK English. When writing in one dialect or the other, you’ll want to keep these differences in mind and make sure your editor knows about them as well.

The US/UK spelling variances can be organized into a series of common groups outlined in this handy chart.

There are other random differences such as grey (UK) and gray (US), omelette (UK) and omelet (US), and bank cheque (UK) and bank check (US). Those you just have to sort out as they come.

UK English: John said, ‘Amrit told me the new Star Wars movie will be “terrible”. I can’t believe it.’

US English: John said, “Amrit told me the new Star Wars movie will be ‘terrible.’ I can’t believe it.”

[Editor note, the new Star Wars movie will rock. Amrit can stuff it.]

Period Use in Abbreviations 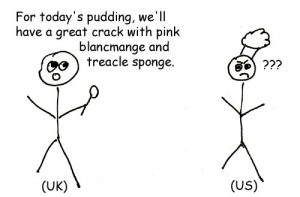 Preposition use, confusing at the best of times for non-native speakers, is also a bit different in US and UK English. There are a few differences, but let’s look at three main ones below:

In UK English “at” is used for time expressions, whereas US English will use “on” instead.

UK English: I will see the new Star Wars movie at the weekend.

US English: I will see the new Star Wars movie on the weekend.

“At” can also be used in UK English when referring to school, whereas US English would use “in” in the same situation.

US English: I studied light saber engineering in school.

In UK English, “in” will used for street names, whereas US English uses “on.”

US English: I live on Larch Street.

Despite being named after a British University, the Oxford comma (the comma used before “and” in lists (e.g., I like wookies, ewoks, and droids)) is not considered standard in UK English because only one style guide (Oxford) recommends it. However, the serial comma is mandatory in US English (except in the journalistic AP style) because all other US style guides recommend using it.

Acronyms (Initialisms, per UK) are usually in all caps in US English but title case in UK English. For example, NASA and UNESCO (US) are Nasa and Unesco (UK).

Collective nouns, which are nouns that refer to groups, are often plural in UK English but singular in US English.

UK English: The team are close to winning! The audience are as silent as ghosts.

US English: The team is close to winning! The audience is silent as a ghost.

There are other minor differences in spelling and grammar and usage. For example, present and past perfect are more often used in UK English, and some words choices are optional in one language and not the other, but the above guide covers the main (and most important) grammar differences between US and UK English.