August 11, 2017 by ProofreadingPal in Writing Guides

“Fashion,” a word we typically associate with clothing, applies just as well to language.

Words have their “in” years, after which (like fuchsia culottes) they are usually very much “out.”

A moment of silence, please, for some of our old friends:

Aw, we hardly knew ye, yet we knew we were sick of ye.

There are many reasons why certain words come into vogue, and a big one is that people think using a longer word in place of a shorter word makes them sound smarter. I remember a certain sometimes relevant, eyebrow-less celebrity once talking about how teenagers feel “pressurized” to conform.

Really? I wondered. Teenagers are balloons?

Yes, technically a definition of pressurized is “to apply pressure to,” but it has many other more prominent meanings, and would it be so hard just to say “pressured”? Or did she think the extra syllable would make her sound like Smarty McSmartpants?

Such is the case now with the word “utilize.” Here’s Merriam-Webster’s current definition:

:to make use of : turn to practical use or account I’m a great person for utilizing waste power —Robert Frost

It’s subtle, sure, but look at what that means. “I use something” does not mean the same thing as “I utilize something.” It’s those verbs: “make use” and “turn to.” It’s also that adjective in Frost’s quote, “waste.”

The following statements need the word “utilize” to make their full meaning apparent and use the word correctly:

So something that was not of use before is made useful now. It’s a wonderful thing, like turning the sun’s heat into solar energy or puffer fish toxin into Botox.

And yet, where do I constantly see “utilize” being used these days?

I utilize my skills for decision-making leadership. (Oh? So they were lousy skills?)
We utilized data from the CDC. (The CDC won’t like the sound of that.)
How can I best utilize my faith in God? (OK, I’m not touching that one.) 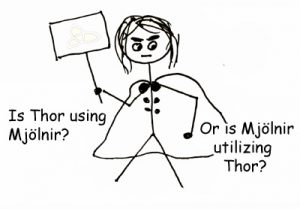 Yes, it’s two extra syllables and sounds fancier than “use,” but it’s also got a connotation that 97 percent (or so) of my clients do not mean. I almost feel like people who say “utilize” correctly should get a free slice of cake or something.

And can I ask, what’s suddenly wrong with the word “use”? It’s a lovely word. It’s not fancy, I guess, but it gets the job done.

Eventually, either the incorrect use of “utilize” will fall out of favor and I’ll start complaining about the misuse of some other word (perhaps “employize”), or people will use “utilize” as a synonym of “use” so much that it will become its official meaning (which will be a shame because the real meaning of “utilize” is useful).

Until then, I will just issue this warning: the longer version of a word doesn’t usually mean the same thing as the shorter version, or there wouldn’t be a longer version in the first place.