Place Order Get Instant Quote Free Sample
Home  /  Writing Guides   /   When Should I Use Contractions?

When Should I Use Contractions?

September 1, 2017 by Chris in Writing Guides

Traditionally, use of contractions has been strictly forbidden in academic writing. You might remember a teacher at some point who told you never to use them. However, major academic style guides have differing opinions on whether contractions are acceptable.

According to the APA, you should refrain from using contractions for class writing assignments, theses, dissertations and the like. These are formal assignments, and your writing style and tone should reflect that. Cambridge Dictionary agrees, stating that “use of contractions in formal writing is usually not acceptable.”

However, some other sources disagree and even recommend the use of contractions. The Chicago Manual of Style states, “Most types of writing benefit from the use of contractions. If used thoughtfully, contractions in prose sound natural and relaxed and make reading more enjoyable.” Chicago does warn against overuse. For example, while in speech you might say “shouldn’t’ve,” you would almost never do this in writing. But “shouldn’t have” would be acceptable in Chicago style.

The Modern Language Association also sees no problem with the use of common contractions. “The MLA allows contractions in its publications. In professional scholarly writing, sometimes a formal tone is desired, but often a more conversational approach is taken.” MLA argues that in most cases contractions are easier to read and sound more natural.

But MLA warns that context matters: “Contractions may not be suitable for all types of formal writing—like a research paper, where protocols for formal writing are being learned.” MLA also says there are “countless other examples” where contractions wouldn’t be appropriate.

The Associated Press Stylebook, used by many journalism and business publications, recommends the use of common contractions. The guide also includes a warning against overuse, particularly when quoting sources: “Do not use substandard spellings such as gonna or wanna in attempts to convey regional dialects or informal pronunciations, except to help a desired touch or to convey an emphasis by the speaker.”

So, Wait, When Do I Use Contractions? 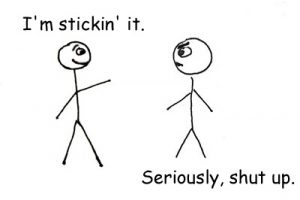 If you’re writing dialogue for a short story, a phrase like “Don’t you have it?” sounds more natural than “Do you not have it?” In marketing, using the patterns of everyday speech to communicate effectively with customers has been standard practice for decades. (Compare McDonald’s slogan “I’m lovin’ it,” to, “I am loving it.”)

There are other situations where contractions aren’t acceptable. If you know your professor is old school and hates ending phrases with prepositions, you should err on the side of caution and keep your language formal. To use an example from MLA, if you’re writing to a judge requesting leniency in sentencing, use of contractions could seem dismissive. Like everything in writing, audience and context are key.