When to Use Who and Whom

I see this one done incorrectly all the time—not just at work, but also in published writing. The problem doesn’t seem to be confusion between the subject “who” and the object “whom,” but confusion about how sentences work.

So let’s start there.

Sentences are made up of clauses and phrases. A clause is a group of words that includes a subject and a verb. There is a thing, and the thing is doing something.

A phrase is a group of words that functions as (or can replace) a single word.

Sometimes, a phrase is also a clause (because it functions as a single word and it contains a subject and a verb).

The clock Seyed (subject) bought (verb) for his mother runs.
The man I (subject) was talking (verb) to yesterday walks.
Julia, you (subject) know (verb) her from other blog posts,  writes.

We remember our basic subject/object grammar: 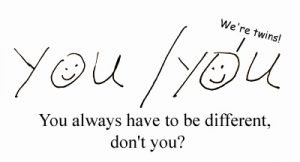 When the phrase is also a clause, the subject of that clause is treated like all other subjects.

The guy he always wanted to be is rich.
The crowd we joined that Thursday turned out to be a line for tickets.
The movie they wanted to see was sold out.

And the object of that phrase-clause is treated like all other objects.

She looked silly in the dress her mother gave her.
But he looked even sillier when his sister made him wear it.
Their father told them both they were making him crazy.

I’m fairly certain most of us would realize the following sentences are incorrect:

The guy him always wanted to be is rich.
The crowd us joined that Thursday turned out to be a line for tickets.
She looked silly in the dress her mother gave she.
But he looked even sillier when his sister made he wear it.

You just have to remember it all works the same when “who/whom” is involved. So just as you would say:

Who (subject) loves me?
I love whom (object)?

So it’s really not difficult. I think people just have a knee-jerk reaction to “to whom,” rather than “to who,” probably because their third-grade teacher was a big meanie.

It’s not surprising that many people just avoid the whole who/whom thing altogether by using “that,” but bear in mind that people are not “thats.” They are “whos.” And if you know your Dr. Seuss, you know how important just one Who can be.