Write Clearly with the Right Words

January 7, 2016 by ProofreadingPal in Writing Guides

English is a confusing language at the best of times because of its many linguistic influences over the years. It’s our job here at ProofreadingPal to uncover and fix such instances, and there are a few words particularly that we find ourselves changing over and over again to make language more precise.

Using “They/Them/Their” in the Singular

For a few reasons, it’s becoming increasingly popular for writers, particularly ones who are interested in gender identity, to use “they” in the singular sense.

However much this may satisfy your political correctness, this is still grammatically incorrect and can create ambiguity in writing. For the first example, readers might be confused as to why the writer is using “they” to refer to one “patient.” They may think it’s a mistake and wonder whether there are several patients or just one. For the second example, Google is an organization, which is a singular entity. If writers refer to Google as “they,” this may again make readers confused. Is the writer referring to just Google or Google and its staff or to another entity or to people inside Google? Thus, to improve the preciseness of your writing, use:

Although it is becoming increasingly popular to use “they” in the singular sense—and it may very well be that it one day becomes acceptable usage—avoid it to improve the clarity of your language.

Using “While” to Show Contrast

It’s customary, particularly in academic writing, to use “while” to show contrast.

Both sentences above are not incorrect grammatically, but because of the more common use of “while” as a marker of time, by using it in the contrasting sense, you create a slight ambiguity of meaning for someone who is not reading closely. Most style guides recommend you don’t use “while” in this way. “While” should technically only be used for time.

So rather than “while,” you should use two different words, depending on the context: although and whereas.

Using “Since” and “As” for Causation 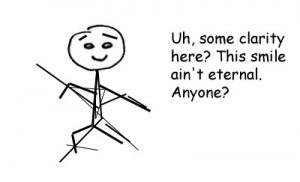 Probably the most common use of ambiguous language comes from using “since” and “as” for causation. It’s common to use these words for causation in speech. However, they can create ambiguity, particularly in writing because “since” and “as” both have alternative meanings. “Since,” like “while,” should be used for time, whereas “as” should be used for comparison, among other things. For example:

Rather than “since” and “as,” most style guides recommend you solely use “because” for causation because it has no alternative meanings. Look at the clarity of:

Next time you feel like your writing isn’t as precise as it could be, consider the above and use words that are clear and unambiguous.