July 31, 2019 by ProofreadingPal in Editing Tools

Publications have their own distinctive ways of expressing themselves. If you were to read an article from Vanity Fair blind, you might not be able to identify the source definitively, but you’d certainly know that it did not come from TV Guide. The New Yorker’s style is recognizable to the point of parody. Readers of National Geographic can easily conjure plausible-sounding imaginary headlines like “Norway, Land of Ice and Fire.” And although the news magazine Time seems rather staid nowadays, its idiosyncratic syntax was much mocked upon its 1923 debut. “Backwards ran sentences until reeled the mind,” marveled critic Wolcott Gibbs. “Where it all will end, knows God!”

In these examples, we’re talking about voice. That’s a slightly tricky and subjective thing, determined by unwritten rules and preferences.

Let me disclose here that I’ve written for mass-circulation magazines, including some of the big names, and one reason I’ve continued to get work is my ability to mimic a given publication’s stylistic tics. But whether the author has that ability or not, it is the editor’s job to shape their writers’ prose into something approximating the publication’s signature tone.

Magazine people talk about style to mean a set of written rules and codes governing punctuation, abbreviations, capitalization, and so on. These rules are compiled and indexed in reference books (or style guides). Should we write “19th Century,” or “nineteenth century”? Must we include a comma before the final item in a list? In the phrase “Jane Smith, president of Takoma University,” should “president” be capitalized? Is it “re-emphasize” or “reemphasize”? “The Brothers Karamazov,” or The Brothers Karamazov? When such questions arise, writers and editors consult the relevant style guide.

The two major guides for periodicals are the Associated Press Stylebook and the Chicago Manual of Style. Most major commercial publications base their styles on either one or the other, often with well-defined exceptions. Through longstanding habit or personal preference, these house rules trump the mandates of the style guide.

Take The New Yorker’s diaeresis. This is the diacritical mark that appears over the second in a doubled vowel pair to indicate a new syllable. Look again at “reemphasize.” A reader might stumble over the double vowel and give it a long E sound—something like “reem-pha-size” to rhyme with “team surprise.” Chicago typically does not hyphenate compound forms, though it gives the option to do so in cases where the reader may be confused. The New Yorker, though, splits the difference with its two little trademark dots: “reëmphasize.”

As it happens, most of our clients at ProofreadingPal aren’t writing for The New Yorker, though we certainly know that style. Many of our manuscripts are destined for scholarly journals, where the demands of academic writing and the magazine trade collide. Journals typically employ one of the major academic style guides, such as APA and CSE. These documents cover many of the same questions of usage and syntax as the Chicago or AP guides—though usually in less detail—but their primary focus is on matters specific to scholarly readers: the proper formatting of citations, footnotes, equations, and references. 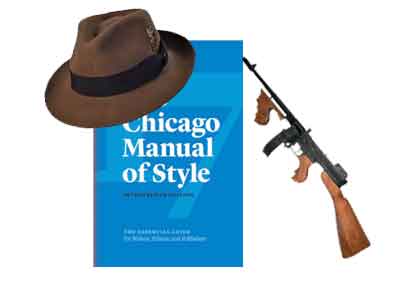 I recently worked on a project for submission to an international journal. The client specifically requested that the citations be formatted in Harvard style. He also provided a <a href=” />link to the journal’s guidelines. Notice that the journal says flat out “References to other publications must be in Harvard style,” and immediately below this, it gives a long, comprehensive list of examples.

But here’s the rub: the sample references are not actually formatted in Harvard style. They’re in a house style that’s closely based on Harvard, but there are crucial differences. True Harvard style, for instance, does not include the abbreviations “No.” and “Vol.” that consistently appear in the examples.

In the end, I formatted the references in accordance with the journal’s in-house style. I’ve had enough experience with magazines to know that house rules supersede all else, and I figured it would be easier for me to explain to the client why I had not used strict Harvard style than for them to explain to the publisher why they had failed to follow their guidelines, a failure that could make the difference between getting published and not and which could thus have career repercussions.

The customer is always right, they say, but sometimes it takes big-picture thinking to identify who we mean when we talk about “the customer.”