What’s the Difference between Diffuse and Defuse? 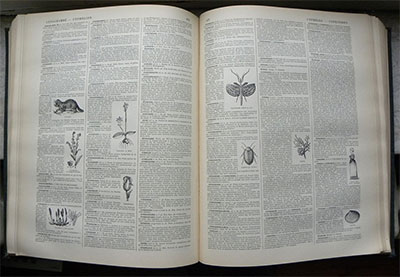 It’s the holiday season once more, when families draw together. Togetherness can be a wonderful thing, but gathering in close proximity for extended periods can put a strain on our relationships, bringing out the worst aspects even of those we love the best.

I grew up in a large family of Irish descent, and our holiday get-togethers would often degenerate into arguments. These were usually good-natured (though sometimes less so), and always over trivial things: a game of Monopoly, a misremembered family story, even—because we were a bookish family—a word’s pronunciation.

There are, for instance, the questions of palate vs. palette vs. pallet and rein vs. reign vs. rain.

When these debates got too heated, one of us would invariably bring down my father’s dictionary from the shelf. It was a massive thing, two thick volumes, bound in a deep burgundy morocco, its pages as thin as a bible’s and crowded with tiny print. I still remember the gilt stamping on the spines announcing the contents: Volume I defined A–Pocket veto, and Volume II covered Pockmark–Zymurgy.

When that dictionary hit the table, it was a signal that the argument would soon be over, satisfaction guaranteed, and the victor, whoever it was, would triumphantly invoke a once-popular catchphrase: “Look that up in your Funk and Wagnalls!” (Kids, ask your grandparents if they remember Laugh-In.)

But you’re not reading this blog for Uncle Jack’s reminiscences of Christmases past, are you? No, you’re here because you want to clarify the distinctions between sets of words that may be similar in spelling or pronunciation. Perhaps you want to settle an argument within your own circle of loved ones. Why not? There are probably more important things to argue about than the definitions of words; but if there are, I certainly don’t know of any.

Let’s assume a family squabble has begun yet again, this time over which words in our confusing pair of “Diffuse vs. defuse” is correct.

Taking down the old Funk and Wagnall’s from the shelf, we see that “diffuse” means “to spread something over a wide area.” It’s often applied to particles in the atmosphere.

She turned on the kitchen fan, and the smoke began to diffuse.

The scent of potpourri diffused throughout the house.

When used this way, as a verb, the –se ending is sounded as a Z: duh-FYOOZ, to rhyme with “the blues.” Diffuse can also be used as an adjective to describe something scattered or widespread; when so used, it takes a hard S sound, and rhymes with “obtuse.”

With just a million people spread over 147,000 square miles, Montana has a diffuse population.

The adjective form of “diffuse” is sometimes confused with “diverse,” but the former refers only to distribution, while the latter applies to composition. The aforementioned population of Montana, for instance, is 88.7 percent non-Hispanic white, so even though it is diffuse, it is not particularly diverse; that is, it exists over a wide geographic spread, but its composition does not vary greatly.

But we too seem to have wandered far afield. We were talking about tense family gatherings. Things are getting ugly; your little sister is crying in the guest bedroom because your uncle’s new hotel just jacked up the rent on Ventnor Avenue. So what is it, exactly, that you need to do?

The correct choice is “defuse,” a verb pronounced just the same as the verb form of “diffuse.” There’s a bit of poetic reasoning going on here. An uncomfortable scene is analogous to an explosive device; a minor disagreement lights the fuse, and every passing moment takes us closer to the big kaboom, when simmering tension erupts in a firestorm of hurt feelings. To keep the situation from escalating, you need to remove (or extinguish) the fuse from the metaphorical bomb.

Cut the red wire to defuse the booby-trap.

As with many commonly confused word pairs, there’s a similar poetic logic at play in the incorrect choice. We have a whole slew of idioms characterizing angry thoughts as a sort of cloud or vapor. When there’s an “atmosphere of tension,” there might be bad feelings “in the air.” When tension rises, we visualize it as growing more concentrated, as “so thick you could cut it with a knife.” To dissipate this miasma, someone might speak frankly to “clear the air.”

But diffusing bad feelings can actually make the problem worse. Although spreading something over a wider geographic area can reduce its concentration, that’s often not the case: diffusion can also describe the dissemination of information or the spread of contagious diseases. When you’ve got a few angry people in tight quarters, diffusing that anger could leave you with even more angry people, scattered over a larger area.

Defusing a situation means tackling that anger head-on. In practice, this often means finding common ground on which all parties can agree, thus preventing an explosion of temper and helping us find our way back to harmony.

Now that we’ve cleared that up, all of us at ProofreadingPal wish you a safe and happy holiday season. Perhaps treat yourself to a free sample of 400 words of editing? May all your holiday gatherings be joyous, and may discord be banished from all our hearts. (And maybe leave the Monopoly set on the shelf; better to not take any chances.)