How to Understand NFL Lingo, Part 3 of 3 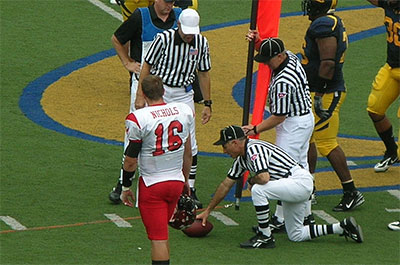 In this series on NFL lingo, we’ve covered the positions and other basics of American football and how American football is played. In this final segment, we’re going to cover divisions, penalties, and the cool stuff NFL fans get to say.

A team can get into the postseason without winning their conference or division because the arrangement of the teams needs another team in the playoffs who isn’t a conference/division winner but does really well during the season. Such a team is a wildcard.

The NFL figures out who should play whom during the football season. Pro games are played on Sunday for the most part, with special games on Monday and Thursday nights.

Because the number of teams doesn’t really fit with the season’s length, sometimes teams have to sit out a week, which is called a bye.

When you’re trying to learn how to watch American football, let alone explain the topic to someone else, there can be a major obstacle in penalties. While play may certainly go on for some time without any penalties, there are also games where there seems to be nothing but one penalty after another.

First, football is more than a little dangerous, and it probably does players even more harm than we currently know. About half of the penalties on the books are about making sure the play is fair, whereas the other half is trying to keep people from being hurt. When a referee (ref) sees a penalty, they throw a yellow flag from their pocket on the ground.

Different penalties come with different punishments, including loss of yards, loss of down, automatic first down, and replay of previous down. In pro ball, delay of game is just five yards, whereas grabbing someone by the facemask (super dangerous!) is fifteen yards.

There are more than seventy official penalties in the game, so I’m just covering the most common ones here.

When the players block one another, they can only do this by standing in front of the opponent and being a wall. Once the player slips by them, they can’t hold on to them. If they do, that’s holding.

When the quarterback (or whoever) throws the ball, players are not allowed to figure out to whom the ball is going and tackle them. While they’re allowed some contact as long as they’re trying to catch the ball, they can’t physically interfere with another player’s ability to make a reception, or it’s interference.

When the two teams square off against each other before play starts, they can’t cross the line of scrimmage or make a move that looks like they’re about to.

When the offense does this, it’s a false start or being offside. Whether or not they cross the line, it’s illegal forward motion. When it’s the defense, it is being offside. If the defense actually goes into the zone around the line of scrimmage, that’s a neutral zone infraction or encroachment.

Players can rough (tackle too hard) all sorts of people: the quarterback, kicker, passer, holder, and even just the receiver/runner. When a player makes a tackle, they’re supposed to grab the other player in a bear hug and take them down. Penalties result when a player grabs someone by the facemask or the horse collar (back part of the neck-shoulder padding) or makes helmet-to-helmet contact. Jerking people’s heads around or making such contact can cause horrible injuries and will at least “ring their bell.”

Players are also not allowed to tackle someone below the waist if they’re engaged with another player (chop block, low block, or cut block).

If a player just really goes after someone more than is called for, it’s unnecessary roughness.

Other such self-explanatory penalties include taunting, illegal touching/tackling of someone after they’ve signaled a fair catch, too many offensive/defensive men on the field, excessive celebration (i.e., delay of game), illegal blindside block, and illegal use of hands.

There are so many insider terms in football I couldn’t begin to try to cover them all. Even sources I’ve found can’t do it. But here are some favorites.

As pro football is most often played on Sundays, this reminds everyone that upsets (i.e., unexpected victories by an unfavored team) happen all the time.

“Bad calls are a part of the game,” the saying goes. They happen when the ref just completely miscalls a play or penalty. Even when it’s an incredibly blatant mistake and keeps a team from going to the Super BowlTM, all calls by the refs stand.

A blitz happens when the defense brings in all available players to go after quarterback to make a tackle behind the line of scrimmage, or a sack.

The quarterback just throws a long, long pass for the bomb. When this is done as a last resort, usually pretty much blindly, it can be called a Hail Mary.

To make sure the team has actually advanced a full ten yards, the two-person “chain gang” on the sidelines has two poles connected by a ten-yard chain. “They’re calling for the chain” means the call is close and the chain gang runs out on the field to measure it. If it’s short, even by a few inches, then a first down is not made. Thus, the expression “fourth and inches.”

The ball is on the field, but the play is over.

The quarterback has members of the offensive line to block the defense while he hands off, runs with, or passes the ball. Once they move outside that offensive line (in a roll out), they are out of the pocket, and thus vulnerable. Some quarterbacks in this position will try to get rid of the ball, but if they throw it away with no one nearby who might actually be able to catch it, that’s a penalty of intentional grounding.

The football is sometimes called the “pigskin,” though it was never actually made of skin. Originally, it was made out of an inflated pig bladder, usually stuffed with straw or something else light. Because it was a bladder, it was sewn up. These laces allowed the person throwing the ball to get a good grip on the bladder. Today, it’s just made of leather, but the player still puts their fingers on the laces to get a good spiral going during the toss, which increases the length of the throw.

Usually, the quarterback is right behind the center, but sometimes for passing plays they want more space to work with, so they’ll stand a couple of yards behind the center in “shotgun formation.”

The quarterback signals the beginning of play, or snap from the center, by a word, usually “hut.” They will use other words first as a sort of countdown for their own team. For example, in the huddle (circular conference of the offense on the field before the play), the quarterback might say, “On three,” and then when he says, “Hut, hut, hut,” the center hands over the ball and play begins.

This is particularly important when trying to psyche the other team into thinking play is going to begin on the wrong “hut.” If the defense moves too early, it’s a penalty of being offsides.

When a player makes a touchdown and wants to celebrate, they might throw the ball hard at the ground, or spike it.

When the offense feels they have nothing to gain from running a regular play, either because they’re already going to win the game or there’s just not enough time on the clock to do anything, the quarterback can “self-ground” by taking a knee to end play. It’s basically the football version of “I pass.”

And remember, whenever you’re writing about a special topic, we at ProofreadingPal have a staff full of people wanting to help!