Tips for Using Singular “They”

January 1, 2020 by ProofreadingPal in Grammar

Many teenagers find their parents embarrassing in some way or another, and as my children, now ten and thirteen, started approaching the end of elementary school, I expected my words and actions might come under intense scrutiny soon. Still, I was a little surprised to discover one way in particular my thirteen-year-old found me awkwardly outdated: my occasional use of “he or she” or “his or her” with “someone” or another gender ambiguous person! When I would use such an expression, it was met with an irritated “You can just say ‘they’!”

My daughter’s modern ear heard “he or she” as biased.

As an editor, I am naturally sensitive to language matters, and I took this criticism seriously. I’ve made an effort to modernize my pronoun usage, and in today’s blog I’ll provide tips to avoid gender bias in your pronoun use.

First, a little review about pronouns, words that may be used in place of a noun, or a person, place, or thing. English pronouns include the following:

The singular pronouns he and she are gendered (considered male and female), which can present problems when the gender of the antecedent (what the pronoun refers to) is unknown or ambiguous, when it is better not to reveal the gender, or when the person to which the pronoun refers identifies as nonbinary (neither male nor female). Using it, the other third person pronoun, which is gender neutral, is rarely appropriate for use with people, as the word it can imply a non- or less-than-human status. Consider, “The person asked if we would give it a drink of water.” Sounds weird, right?

English speakers have made many attempts to manufacture gender-neutral third person pronouns, including zie, ey, ve, e, ter, and others, but none of them has gained significant traction, not even thon, which made it far enough to appear in Merriam-Webster and Funk & Wagnalls for decades but was rarely spoken.

The better option for a gender-neutral third person singular pronoun, the one often used but not always accepted by grammar purists, is they. The use of singular they is not new. Since the fourteenth century, this pronoun has been used as a singular when the gender of the antecedent is unknown or needs to be hidden. Examples of this type of usage can be found in the works of many writers throughout the centuries, including Geoffrey Chaucer, William Shakespeare, and Jane Austin. But some people balk at using they as a singular pronoun because it has always been thought of as a plural pronoun and thus, goes the thinking, is not to be used to refer to a single person.

In conversations, the singular they is commonly used and accepted, as in, “The chef at the new French restaurant on the corner used all of their best recipes on the opening night menu.” The speaker doesn’t necessarily know the chef’s gender, so they say their (did you notice I snuck in another “they”?). And it’s rare anyone bats an eye at such a sentence. 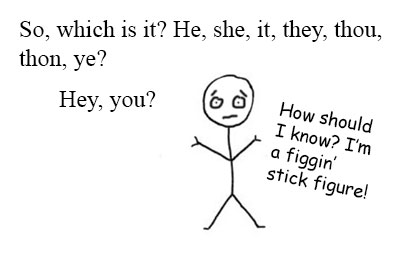 Many people are still uncomfortable with using they for a specific, known person, though. It is common to try to fit all individuals into the categories of male or female by using he or she, but not everyone fits into these binary categories. Insisting on using he or she for someone can easily result in error or offense, as when the AP wrote an article earlier this year about singer Sam Smith’s announcement of their nonbinary status and use of pronouns they/them/their and yet referred to Smith using he/him/his throughout the article.

Such contradictions are evidence to our changing use of language and understanding of gender identity. Over time, using the pronoun they fluidly will undoubtedly become part of everyone’s daily speech no matter the purpose.

This transitional place in which we English speakers find ourselves presents a challenge for those writing for formal purposes. A review of the most current editions of the Chicago Manual of Style, MLA, APA, and AP shows agreement on two main rules for pronoun usage:

1. When referring to a person who is gender fluid, nonbinary, or otherwise does not identify with the pronouns he or she, use they. This is a matter of respecting individual rights about identity.

• Take out the pronoun: “A teacher should be kind to students.”

Following these guidelines will help you avoid gender bias in pronoun use and help your writing maintain credibility with your audience.

Something to reflect on: in the seventeenth century, the plural and formal second person pronoun you took over for all second person pronoun use, pushing thou aside except in certain English dialects, and this change, like today’s changing use of they, he, and she, caused confusion and controversy. But slowly the dust settled, confusion cleared, and singular you was accepted.

At the rate things are changing now, it seems the acceptance of singular they in speech and formal and informal writing is not too far off.