What to Do When You Can’t Use Emojis

December 3, 2019 by ProofreadingPal in Professional Writing

Last blog post, I talked about how the emoticon/emoji has been a highly successful invention of digital communication that fulfills a need by signaling an emotion in a conversation largely without context.

This time, let’s deal with the fact that emojis are still not OK in professional and some types of personal communication and consider some good alternatives.

When Emojis Are Verboten

When you’re being formal, emojis are off limits. They are conversational markers that specifically indicate emotional states. Moreover, as we talked about last time, they were invented specifically to indicate when the speaker is kidding.

So it makes a great rule of thumb: if kidding is inappropriate, don’t use emojis.

It’s tempting to use emojis to seem more human, such as by using a smiley face when giving criticism or a sad face when giving bad news. However, emojis are inherently casual and typically rely on an established relationship, even if an online one.

Emojis Are a Cop Out

Sorry, but it’s true. Emojis are so popular in chatty digital communication precisely because, like gestures in face-to-face conversations, they are easy and vague. Don’t know what you really mean? Make an “I dunno” shrug. Because the conversation is informal and chatty, the audience is expected to take that as the best the speaker can do.

This winky face doesn’t indicate “I’m kidding.” It’s saying, “I don’t want to bother to explain, and I’m using a winky face so you’re not supposed to get mad about it.”

No wonder this happens:

Manager A: You think you can get that TPS report in by COB?
Employee A: Nah. 😉
Manager A: I beg your pardon?

There is only one real alternative to using emojis when we’re communicating digitally, and that is to use your words well enough that they avoid the ambiguity emojis are used to resolve.

Emoji-free communication (AKA formal communication) provides a context in which kidding and teasing are not appropriate, and thus they are not expected. Unless you say something truly off, the receiver will not suspect you of sarcasm or of making a little joke.

Let’s use a real-world example. New editors here at ProofreadingPal are often uncomfortable with giving negative feedback or “criticism,” and they’ll leave a comment something like this:

The use of the Oxford, or serial, comma must be consistent. I see you use the comma more often than you don’t, so I’ve added the comma where it’s absent. 🙂

The client is paying to be told about their use of the Oxford comma, and we as editors are not being paid to befriend people. Not only is the smiley face too informal, it’s being disrespectful of the client by signaling, “Don’t get mad. I’m just doing my job!” 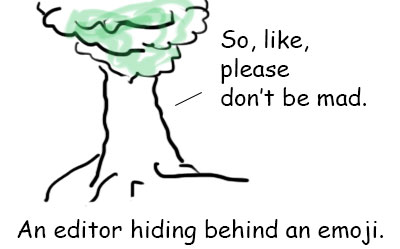 Note that if we take the smiley face out, there’s no need for anyone to feel anything negative:

The use of the Oxford, or serial, comma must be consistent. I see you use the comma more often than you don’t, so I’ve added the comma where it’s absent.

Other typical comments we leave for clients include the following:

Edited to correct bad parallelism.
You said this in the preceding sentence, so this material can be deleted as redundant.
You might add some examples here to demonstrate your point.

Note that the language, as terse as it is, is completely impersonal. There’s no need for an emotional signal because the content has nothing to do with emotions.

Use Temptation as a Self-Check

If you suddenly feel the urge to use an emoji, use that sensation to double-check your writing. Have you become emotional when you shouldn’t? Sticking with our example of editorial commentary, let’s look at this:

You keep talking about the subject rather than just saying what you mean outright. You’re wasting the reader’s time and making me wonder if you really have something to say. I know you have a point, so make it! 🙂

Yikes. This is a totally inappropriate comment by an editor. A teacher with a very good relationship with the student might be able to get away with it, but even then it’s pretty bad. The tone is far too emotional, and as a consequence that emoji is added to “soften the tone.” But the tone shouldn’t be harsh in the first place

Take away that emoji, and it’s clear the writer is being too emotional. It’s not an editor’s place to complain at the client. Saying this without emojis means getting rid of the blatant frustration as well as the somewhat condescending encouragement. Something like this would be more professional: