June 11, 2021 by ProofreadingPal in Writing Fiction

Last month, we wrapped up our look at how the themes of a story work in tandem with its structure. This knowledge is vital during revisions, when you’re fixing a story that doesn’t land or refining the shape to highlight the meaning. But it assumes that you can see the shape of your story in the first place—that is, that you’re working with a finished draft, or one that’s nearly finished.

Getting from an initial idea to a completed story seems like a mysterious process for the novice writer. Let’s demystify it a bit.

From A to Z and All Points in Between

Very rarely, a story will drop into your head fully completed: beginning, middle and end. More often, you’ll start with only the idea for a story; completing it is a matter of labor. A scene, an image, a situation, a character, a setting, a phrase of dialogue—anything that jump-starts your creative thinking—is your starter, as a meaty bone is the starter for broth. But an idea is not a story in itself, any more than a bone is pot of soup. To make something of it, you’ll need lots of other ingredients, as well as time, tools, patience, and a fair degree of skill.

There are two broad schools of thought as to the best way to develop your starter into a story with a coherent through-line from start to finish. Some writers (plotters) work out the story beats in advance before actually sitting down to write. Others prefer to leap immediately into the story, trusting their instincts to pull them along, figuring it all out as they go along. In writing circles, such writers are sometimes called “pantsers,” from the expression “to fly by the seat of one’s pants,” meaning to improvise when faced with an unfamiliar situation.

Plotting can take many forms. Some plotters work from a detailed, multi-level outline, the kind you’d use to write a college paper. Others use a bare-bones synopsis, relating the essential “what happens” while entrusting the why and how to memory. Some jot down disconnected scenes and images on file cards, rearranging them until they form a satisfying narrative. I have been known to develop a synopsis in a work journal, asking questions and arguing with myself when I reach a decision point: “After the gunfight, he goes where? Back to the city? No. Too many bad memories there. Too much temptation. Someplace new. Where? Upstate, maybe. His sister’s summer house?”

Pantsers skip all that, plunging ahead to get words on the page, solving story problems as they arise. Without a predetermined path forward, they may use different methods to sustain their momentum over time. A pantser might end the day’s writing with an unanswered question, for instance, or even with an incomplete sentence—some kind of prompt to ease her into her writing the next day.

Some writers swear by one method or the other. Stephen King, for instance, is a self-avowed pure pantser; he admits that sometimes he has no idea what he’s going to write the next day. Many pantsers say they find the lack of structure liberating. Without the roadmap of a plot, there’s more opportunity for happy accidents, or for those magical moments when the characters act with their own will. Outlining, they claim, is a form of procrastination, a waste of time and energy. You’ll have to sit down and write eventually, anyway; no story, no matter how meticulously preplanned, ever writes itself. So why wait?

The obvious counterargument is that time spent preplotting will be time saved during the writing process. Your instincts might lead you into an unworkable dead end, leaving you no choice but to scrap a load of finished writing and start all over. By planning ahead, you can avoid such trouble.

Worse, pantsing can produce flabby prose, where the writer thrashes out their plot points on the page by describing what the character does not do:

Shooting McGreevy would bring the heat down; I had to lay low for a while. But where? Griff would let me hunker down in the 49th Street safe house, for a price. But there were too many bad memories in the city. Too much temptation. Where, then? Suddenly it hit me: my sister had a summer place upstate.

That kind of thing is best left in your journal; your readers needn’t be privy to every story decision you make as you write. You can take all that stuff out in the second draft, of course, but any time saved by skipping the panning phase is lost to rewriting. 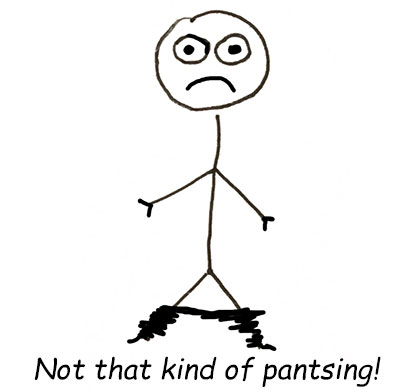 And really, that’s where the divide falls between plotters and pantsers. Unless you’re writing fiction that’s formulaic by design, neither method is all that much more efficient than the other. You either plan first and write after, or put in the writing first and then organize, which is just planning after the fact. Every writer must do both. It’s simply a question of ordering the tasks, and ultimately that comes down to personal preference.

Of course, it’s entirely possible to do both tasks more or less simultaneously. Many (if not most) writers use some sort of hybrid approach between plotting and pantsing.