March 20, 2021 by ProofreadingPal in Writing Fiction

Any story is an account of occurrences; something happens, then something else, in a chain of causation. The significance of those occurrences, and the way in which the chain resolves, will vary according to which story structure you’re using. Your viewpoint character may explore some unfamiliar place, or investigate some mysterious incident. Circumstances may lead your protagonist to a decision about her own place in the world.

Each of these structures has natural starting and ending points, as we’ve discussed over the last few months. Today we’ll look at the event story: how it starts, how it ends, and how it creates and resolves tension.

(A note of caution before we begin: We will, as always, be drawing our examples from well-known books, films, and television shows, so be wary of spoilers.)

The event story is similar to the character story in that both deal with disruptions to the status quo. A character story hinges on the protagonist’s desire to change their position in the world. In an event story, the world itself is changing. The established, for good or bad, is under threat. The story ends with the reassertion of the old order or the establishment of some new order.

Of the four story models, the event story is perhaps the most flexible. It is the go-to structure for adventure tales, regardless of genre (e.g., science fiction, fantasy, military, spy thrillers) and is well-suited for episodic franchises like Mission: Impossible or Star Trek; the threat is neutralized by the end of each mission, allowing the status quo to reset before the next installment. It’s also the template for most romances: a new person turns the protagonist’s life upside-down, and the chaos is resolved by the establishment of a relationship or marriage.

The stakes in an event story can vary from the fate of the universe itself to the domestic tranquility of a single household. Obvious threats to the established order include wars, plagues, and alien invasions, but a romantic relationship is a sort of status quo too, and a misunderstanding might knock it off-kilter. The protagonist’s role varies. They may be resisting the change, or working to hasten it. They may succeed, or fail, or simply surrender. In any case, though, the action develops from a disruption in the old order, and the tension is resolved when some sort of order is restored.

Let’s look at some examples to see how the structure plays out in practice.

Along with rich world building and characterization, the animated martial-arts fantasy Avatar: The Last Airbender (2005–2008; created for television by Bryan Konietzko and Michael Dante DiMartino) serves up a clear event story structure. The introductory narration plainly lays out the stakes of the long form plot:

Water. Earth. Fire. Air. Long ago, the four nations lived together in harmony. Then, everything changed when the Fire Nation attacked. Only the Avatar, master of all four elements, could stop them, but when the world needed him most, he vanished.

It’s all there: the peaceful status quo, the disruption, the possible remedy. But the narrator goes on:

A hundred years passed, and my brother and I discovered the new Avatar, an airbender named Aang. And although his airbending skills are great, he has a lot to learn before he’s ready to save anyone. But I believe Aang can save the world.

We can anticipate where this event story ends. Aang saves the world, or fails to, but where to begin? It takes a long time for the status quo to crumble; if we begin when disorder first creeps into the world, we’re not writing a story at all, but a prologue. We begin instead as close to the end as possible with the turning of the tide, the last chance to avert disaster.

The story starts not with the Fire Nation’s initial aggression or with the disappearance of the Avatar, but after a century of grinding warfare, with the bad guys set to conquer the last of the free lands. Aang’s entry into the conflict changes the game, instigating a chain of events that end the war. In the aftermath, the survivors found a new, united Republic. 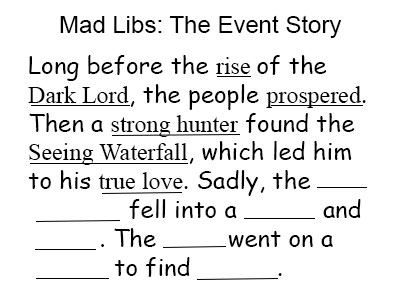 A vastly different, and far less fantastical, event story is Tinker Tailor Soldier Spy (1974), by the late John le Carré. The novel is set at the height of the Cold War. A “mole,” or double agent, has infiltrated British intelligence and is passing secrets to the Soviets, resulting in the failure of espionage operations. This disruption has gone on for decades, unsuspected, until disgraced intelligence officer George Smiley comes out of retirement to lead an off-the-books investigation to uncover the mole. He succeeds, but the process ruins careers and sullies the reputation of the agency. The novel concludes with Smiley ensconced as head of intelligence, tasked with rebuilding the service after its humiliation.

Different though these stories are, note the similarity in their endings. The old order is gone forever; there is no magical restoration of the old status quo, but a new and uncertain future. Science fiction author David Gerrold once wrote, “There are no happy endings, only hopeful ones.” The best event stories avoid too-tidy conclusions in favor of something more bittersweet—endings that acknowledge the lasting damage of disruption, but nonetheless point toward a new beginning.