Third-Person POV on Other Characters

July 19, 2019 by ProofreadingPal in Writing Fiction

We’ve written here before about the dangers of switching perspectives willy-nilly from one character to another (i.e., headhopping). As Kate put it:

You can see that point-of-view issues . . . are incredibly distracting for readers. Bouncing from one character’s thoughts into another’s with no transition is jarring, and it can prevent the reader from fully identifying with the perspective character at the time.

So, when writing in third person from the perspective of one character (i.e., third person limited), it’s a good rule to stay with that character unless the story really needs to change over. However, that doesn’t mean other characters have to limit their communication to dialogue. We live our lives behind one set of eyes, but we can tell a lot about what the people around us are feeling and thinking even when they don’t say a word.

Let’s put this into practice. We’re writing a scene from Sam’s point of view (POV); Sam is worried about his big brother, Dean, who seems to be working too hard. Conveying Sam’s concern is easy:

Sam was worried about his big brother, Dean.

Now, we need to show why Sam is worried without hopping into Dean’s head. We might be tempted to write:

Dean decided to thump his head on the book spread open on the library table.

But then, as you can see, we’ve made that hop. There’s no way Sam can look at Dean and know that Dean has made a decision to do that. But just removing “decided” doesn’t quite do it:

Dean thumped his head on the book spread open on the library table.

“Thumping” something is still a purposeful act. To stay in Sam’s POV, we should say something like:

Dean dropped his head on the book spread open on the library table.

Or even better, IMO:

The thunk of Dean’s forehead against the book spread open on the library table startled Sam into looking up.

Sam doesn’t know yet (and so neither does the reader seeing this fiction from Sam’s POV) whether Dean’s head hits the book out of weariness, frustration, or just being weird. The next sentence can give us more clues:

Dean’s eyes were bloodshot and underlined with heavy shadows.

Looking good for being tired.

And there we go. We’ve stayed 100 percent in Sam’s head, but we know Dean is tired from working too hard without having him say it outright.
In the real world, we interpret nonverbal language from others all the time. So should your POV character.

However, all this does not mean that your POV character should become psychic. Use your own experiences to know what you can and can’t tell from another person’s expressions and gestures.

Good: Sam watched Dean gesture to his watch with a frown, obviously concerned they were going to be late.

Bad: Sam watched Dean gesture to his watch with a frown, making it clear that if they didn’t get a move on, Dean was going to be irritated because he wanted to get something to eat, preferably a cheeseburger, before they checked into the hotel.

While I see this sort of nonsense in every genre, I have to point a particular finger at romance, where Mr. Wonderful will shoot Ms. Innocent (but not so innocent) a look that lets her know “he’s filled with desire that is different from his usual feelings, a true look of pure and everlasting joy in her presence that spread from his heart to the very tips of his fingers.” 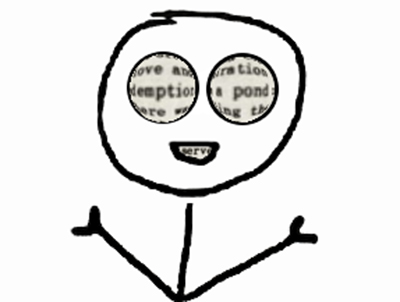 Uh huh. And just what would that look like, exactly?

The people around us express their thoughts and feelings in a variety of ways, including what they’re wearing, how they’re standing, their tone of voice, their diction—all sorts of things. That’s what goes into your fiction as seen through the eyes of your POV character. That way, your POV character is neither blind nor a mind reader, and all your characters can tell their stories without making the reader hop around from head to head.