August 5, 2016 by ProofreadingPal in Writing Guides

It’s not bad enough we have to learn grammar; we also have to unlearn it.

Grammar is as subject to fashion as everything else. After all, it’s just a set of somewhat arbitrary rules about which word goes where based on centuries of contradicting data and opinions. While the changes in grammar keep the publishers of textbooks and style manuals in business, the rest of us are left with the irritation of having to check periodically whether the rules we learned in fifth grade still apply.

Bear in mind, I’m not talking here about common use, by which I mean the way we tend to say things that are wrong but don’t care. If you want to impress with your writing, being a big old grammar slob like everyone else isn’t the way to go. The word “data” is the plural of “datum,” and so you should say “the data are,” whether the slouch in the cubicle next to you does or not. “Between” is used very differently from “among” (notice that’s not “differently than”), and it’s “most important,” not “most importantly.”

No, I’m talking about actual changes in grammar rules, things we were told not to do that are now actually fine, or at least wrong to call wrong.

So to keep you up to date, here are five grammar rules that rule no more.

This one fell to the power of shorter sentences. Used to be, people loved sentences that just went on forever (think Victor Hugo, James Joyce, and Henry James). Now we like our sentences fun-sized, but conjunctions (and, but, or, nor, so) are important for showing us how thoughts relate to each other. So what used to be wrong (such as beginning a sentence with “so”) is now just fine, as long as what follows the conjunction is a complete sentence.

Plural of Acronyms with ’S

A lot of old grammar rules deal with the confusion surrounding proper use of apostrophes, and in figuring all that out, this rule changed. To understand it best, it’s helpful to reference a similar rule that may have influenced things.

There are several homophones that are spelled both with and without apostrophes and thus change meaning accordingly. You know them well:

To deal with the potential confusion, the rule is simple: the apostrophe goes to the contraction.

So to deal with another head-scratcher, the old rule that making a plural of an acronym with an apostrophe s, and thus potentially making it look like a possessive, has been changed to just using a simple s.

Ah, “to boldly go” used to be my favorite error, but now Captain Kirk need not hang his head in grammar shame. It’s fine, as are “to automatically assume” and “to bravely ask.” However, it’s still a good idea to remember that “to go” and “to assume” only make sense in their connection to each other, so sometimes a split infinitive can make for a lousy sentence, such as, “We here at the company want to confidently, assuredly, and successfully provide solutions for our customers.” (Blech.) 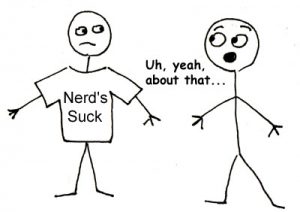 The loss of this one took away my favorite grammar joke. (Hey, I keep telling you people I’m a huge nerd.) But like the conjunction rule, it’s fallen victim to shorter sentence construction.

As with split infinitives, however, it’s good to remember that sometimes ending with a proposition can make for a crummy sentence. If something reads poorly, you might check to see if that’s the problem. I dislike, “What is this box supposed to go on?”

Now, while some of us might mourn the loss of hard-learned grammar rules, we can see in each case that the changes have been for the better, at least in terms of clarity and simplicity. Grammar rules are supposed to suit our needs, after all, not the needs of old dead people. Personally, I’d like us to resolve that whole she/he/they problem next.*