March 26, 2016 by ProofreadingPal in Writing Guides

In a previous post I wrote about some of the most common comma errors: between clauses, with conjunctive adverbs (e.g., “however”), in a series or list, and with the words “which” and “that.” In today’s post I will address a few more common comma errors.

If the name comes first, it’s simple: use a comma. Ex. “Carolyn, my best friend, is right over there.” When the name comes second, it’s a little trickier. Don’t use a comma if the name is essential to the meaning of the sentence. For example, there should not be a comma here:

The book Where the Sidewalk Ends has been a favorite with children for many years.

The title of the book makes the sentence make sense; without it, anyone hearing the sentence would wonder “Which book?” Use a comma if the name could be left out without changing the meaning of the sentence:

My favorite book, Where the Sidewalk Ends, is sitting on the coffee table.

Here, the title could be omitted and the sentence would still make sense (although listeners might still want to know what your favorite book is).

Speaking of names, always use a comma before or after a name or other noun when it’s included in a sentence as a form of address. Leaving it out can lead to very funny and/or embarrassing mistakes:

Using More than One Adjective 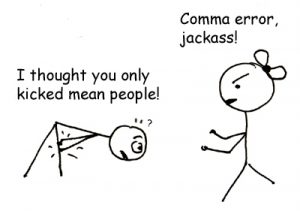 When you describe something in writing, one adjective is often not enough, but adding adjectives can lead to comma errors. In some cases where two adjectives are put together a comma separates them, and in other cases there is no comma. The difference lies in whether the adjectives are coordinate or cumulative.

Coordinate adjectives are two separate adjectives that both apply to a noun, and they are separated by a comma: “a green, leafy salad.” Note that both adjectives modify the noun. They can be switched (“a leafy, green salad”), and the word “and” can be inserted between them in place of the comma (a green and leafy salad), both without changing the meaning.

Cumulative adjectives build upon each other, and they are not separated by a comma: “a light green leaf.” Here, the first adjective (“light”) modifies the second (“green”), which in turn modifies the noun. They cannot be switched, and the word “and” cannot be substituted for the comma.

Errors are also common when using commas in dates, addresses, and geographical names. The rules here are fairly simple: