How to Avoid Comma Errors

I’m sure you’ve had the experience of talking to a person who talks a mile a minute without pausing taking a break or allowing you to interject and they can be very very hard to understand. On the other hand, you’ve probably also noticed, that some people, speak so slowly, and with so many pauses, that by the time they finish, you are not sure what they meant. When people speak with too few or too many pauses, communicating with them can be a challenge.

In writing, the most common way to indicate a pause is the comma, and using commas well helps you get your point across effectively. Unfortunately, writers often use too many or too few of them. In this blog I’ll address a few of the most common comma errors and give you tips to avoid making them in your own writing.

Many people struggle to know how to use commas between clauses in sentences. What’s a clause, you ask? A clause is a unit of words including a subject and verb: “She is nice.” Clauses can be independent, which means they can stand alone, as in the example above. Clauses can also be dependent, which means they can’t stand alone, as in, “or I won’t be there.” 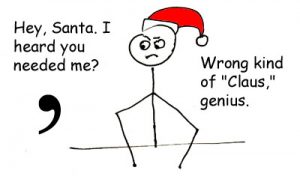 Sentences can be simple and made up of a single clause but are often made up of more than one clause. Joining clauses correctly may require commas and a coordinating conjunction (e.g., and, but, or, nor) and has to do with the order of the clauses:

Dependent + independent: Use a comma (no conjunction).

Ex. “If it weren’t raining, I wouldn’t have this umbrella.”

Ex. “I wouldn’t have this umbrella if it weren’t raining.”

Ex. “I have an umbrella, and she has a raincoat.”

Note that when two simple independent clauses are joined, as in the third example given above, many style guides consider the comma optional. But if you are not sure, just leave it in and you won’t go wrong.

See this post for more on commas and run-ons.

More grammar review: Conjunctive adverbs are words like “however,” “therefore,” and “furthermore.” Always use a comma after one at the beginning of a sentence. Ex. “Furthermore, the pizza was cold when it arrived.”

If, however, a conjunctive adverb comes in the middle of a sentence but not between two independent clauses, you will need to use a comma both before and after. The previous sentence was an example of this. (I snuck it in!) Here’s another example: “His paper, moreover, was not the only one to point out the problem.”

In US English, we use the serial (or Oxford) comma, which is the comma before the last item in a list in running text. Here’s an example: “Dogs like sleeping, eating, playing, and going for walks.” Writers who are more used to UK and Canadian English often leave the serial comma out, but in US English it needs to be there (more on US vs. UK English can be found here).

Commas and “Which” and “That”

“When I noticed the leaves were falling, which is a sign that fall is really here, I felt all warm and cozy.”

Note that you use a comma before and after the “which clause.”

“The leaves that are falling are brown and red.”

Note the lack of a comma.

The above examples are a few of the ways I see commas being used and misused most commonly. I’ll get into some other comma-related issues in a future blog, but for now, you can test yourself. Look at the first paragraph of this blog and find the errors. Check your work against the corrected sentences below: