April 4, 2016 by ProofreadingPal in Writing Guides

OK, because I make a living fixing people’s grammar, I’m obviously going to say that good grammar is super-duper important. But give me a moment anyway, if you please, because I’m going to explain why and when.

In fact, let’s look at the “when” issue first. There are times when getting your point across relies less on the correct placement of commas than on pre-understandings, communication codes such as body language and tone of voice, and other social cues. This is mostly the case when we’re with friends and friendly colleagues, when we’re talking face-to-face, and when we’re conveying uncomplicated thoughts. The following conversation is ungrammatical as all get out, and it really doesn’t matter:

So, for most of us, exceptional grammar often isn’t all that important. We’re surrounded by people who already know the sorts of things we want to talk about, and much of what we want to convey (e.g., The printer needs new toner. That jerk just cut me off. It sure is hot outside.) can basically be delivered with some well-timed grunts and pointing.

Grammar becomes increasingly important when these factors are taken away. When we are (1) talking to strangers or VIPs or (2) saying something complex, good grammar is vital.

Take away the social padding of being among friends, and good grammar performs several functions. It makes us look smart and well educated, authoritative, and attentive to detail. I have a theory it’s one of the reasons American films love to use well-educated British villains. British public school good grammar just makes everything sound more dire. What a loss it would be to have had these classics otherwise delivered:

“I eat up his liver with some fava beans and nice Chianti.”
“I’m looking forward to personally exterminate you, Mr. Bond.”
“I will count to three, Mr. Takagi. There will not be no four.”

So good grammar, like a suit and polished grooming, provides us with social and political power. It says we care about what we’re saying and about how we sound to others. It says our message is worthy of that care and is thus something our audience should listen to with equal care. 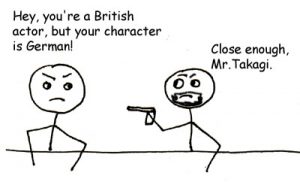 That’s one of the reasons poorly written Tweets are so annoying. If you don’t bother enough about what you’re Tweeting to pay attention to basic grammar, then why should I have to read it? It’s amazing how many unwise, ill-conceived Tweets (the kind that get people fired) are also ungrammatical. No concern is put into the content or the form.

Consider Law Fellow Nir Rosen, who decided he had nothing better to do than mock Lara Logan’s sexual assault with, “Lara Logan had to outdo Anderson. Where was her buddy McCrystal.” A period and a question mark both use up one character, so he couldn’t blame Twitter for his insensitivity or his bad grammar.

Or just treat yourself to some “celebrities tank their own image” Tweets such as Mary J. Blige’s “Why is that people always try to understand estimate my intelligents?!” and, of course, the lovely Justin Bieber’s, “because I thought this interviewer in NZ said ‘Jewman’ instead of ‘German’ people think I don’t know what German is?”

But good grammar is more than window dressing. Stating things properly is perhaps most important when we’re trying to say something complicated, thoughtful, or potentially controversial. The best use of good grammar is when we don’t notice how good the grammar is because it’s allowing us to focus on the inspiration, explanation, or introspection of the words. Good grammar frees us from having to puzzle out meaning that goes beyond the usual level of communication. Consider:

And so it’s clear that good grammar is quite important and that it gets even more so when what we’re saying is important. The next time you have something you want to tell the world—or your boss—remember to treat it with care. We here at ProofreadingPal are standing by to help.