June 23, 2017 by ProofreadingPal in Writing Guides

OK, last time I talked about good parallelism and chronology in sentence structure. Both of those address clarity. But there’s so much more. This time, we’ll talk about how you can emphasize your points through sentence structure, which is both sneakier and more effective than ALL CAPS IN BOLD AND ITALICS WITH EXCLAMATION POINTS!!! and the like.

Sure, format and punctuation work, but the problem is that such tricks very quickly lose their power. Think of listening to someone who has to swear every other word. At first, there is an impact. But too much cursin’ and cussin’ just gets distracting, then annoying.

Using sentence structure for emphasis does not get distracting even if you do it all the time (with one exception, which I’ll talk about in a minute) because readers won’t usually notice what you’re doing and won’t mind even if they do.

Know the Stress Points of Your Sentences

Just like paragraphs and papers, sentences have a beginning, middle, and end. The beginning and end are both stress points, while the middle tends to muffle words. It’s the reason lawyers and politicians like passive voice.

Let’s say you’re discussing that the US sale of prescription opioids increased by a factor of four during the period from 1999 to 2014. This is pretty awful, so it’s tempting just to put the whole thing in italics and stick an exclamation point at the end:

US sales of prescription opioids quadrupled from 1999 to 2014!

Or you might be more selective with your italics:

US sales of prescription opioids quadrupled from 1999 to 2014!

But in both cases, notice that stress still naturally falls on “US” and the dates. Stress points are much more effectively done with word placement, putting the “biggies” at the beginning and end. For me, the biggies are the dates involved and the amount of increase. So:

From 1999 to 2014, the sale of prescription opioids in America quadrupled.

Not sure if this is enough emphasis? Note that it does not help at all now to italicize the word:

From 1999 to 2014, the sale of prescription opioids in America quadrupled.

The word is already emphasized by its placement. Using italics looks more hysterical than emphatic.

A good writer stresses points by the use and placement of words, not by dressing them up.

OK, so I said that using sentence structure for emphasis does not get annoying because it works so subtly. The exception is repetition.

Great writers can use repetition to great emphatic effect, such as Rev. King:

I have a dream that my four little children will one day live in a nation where they will not be judged by the color of their skin but by the content of their character.

And that’s fantastic stuff. But most of us don’t write that well. The kind of repetition for emphasis I usually see on the job reads more like:

It was hot. Really hot. Seriously, I’m talking hot. I thought it was hot yesterday, but that was nothing compared to how hot it was today.

The decision by management at this time, today, is that right now we have to act before it’s too late.

This gets old fast. I mean, really fast. If you use it once in an article or e-mail, don’t use it again. It’s gotten old that fast. Old. Fast.

(You can also use fragments for emphasis, but this post has gotten long enough. I’ll talk about fragments another day.) 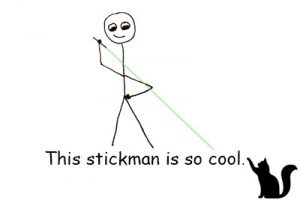 For now, I urge you to bear your readers in mind whenever you want to highlight something. Keep the tricks down to a single use or so, if you must use them at all, and instead stress your points by letting the structure of your sentence shine the light right where you want it.