In a Part 1 of this post, I wrote about the basics of writing in English for non-native speakers: understanding the parts of English composition, getting your thesis and supporting arguments mapped out, and drafting your paper. Many people struggle with the larger process, and many also struggle with more detailed grammar and style issues. In this post, I will write about three common challenges non-native speakers encounter when writing in English and offer some suggestions for dealing with them.

Word Choice and Dictionary Use

It can be hard to choose the right word when you are writing in any language, but English in particular has a lot of options because it comes from so many different origins. As you write, I highly recommend using a high-quality hard copy dictionary rather than one free online because the quality of options will be better. 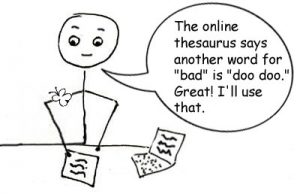 When you are looking up a word, if it has more than one possible meaning, don’t just settle on the first choice the dictionary offers; take the time to be sure that what you are choosing is the right word. Compare the alternate translations the word has to get a good idea of whether the one you’ve chosen is the right one. If you’re not sure, don’t guess! Take the safest choice.

Prepositions are words that show relationships between other words in the sentence, such as “to,” “over,” and “before,” and they always come before a noun, pronoun, or gerund (a noun made from the –ing version of a verb) in a sentence. Prepositions’ subtle differences in meaning can make choosing the right one very tricky in for non-native speakers. If you are not sure if the preposition you are thinking about using is the right one, look at the sample sentences in your dictionary or in an English grammar reference. Comparing your sentence to the sample sentences will give you a good idea if you’ve chosen the right word.

And remember, in all instances:

Transition words and phrases contribute some of the most subtle yet important meanings in English writing. They include (to name just a few) “although,” “however,” and “in addition to.” As with prepositions, the best way to know whether you are using the right transition word is to compare sample sentences in your dictionary or grammar reference.