Guide to Commas, Dashes, and Parentheses

July 4, 2018 by ProofreadingPal in Writing Guides

A sentence is a construction of words that expresses a single thought. Sometimes (but not always), that sentence will incorporate a dependent clause to provide context. Sometimes, though perhaps more rarely, the clause will represent the author’s voice interrupting itself. Sometimes—and the careful reader may be noticing a pattern by now—that little aside seems like different voice altogether, speaking in parallel with the author’s.

However that clause functions—whether it’s an unobtrusive bit of contextual information (like a date) or a full-blown auxiliary thought that might work better as a separate sentence—proper usage demands that it be set off from the body of the surrounding sentence with punctuation. The English language offers no lack of options; we’ve got commas, em-dashes, and parentheses to choose from. (The semicolon, which I just used, has a similar function but obeys its own rules, which I’ll explore in a future blog.)

The problem with having so many choices is that often even experienced writers aren’t sure which is appropriate in a given situation. And indeed, the choice is sometimes arbitrary. But there are some common guidelines and conventions to help you along.

Let’s start with the least obtrusive of these interrupters, parentheses. (That’s the plural; the single mark is a parenthesis, but they always travel in pairs.) Parentheses can sometimes enclose an entire sentence, usually some tidbit of related, but nonessential, information. But when used within a sentence, they typically indicate supplemental context.

Here’s a visual analogy. Think of the caption that appears beneath a talking head on the TV news. There’s a name, maybe a job title, but nothing that requires complex explanation. And usually, you process the caption and the speaker’s words simultaneously without realizing. Parentheses work on that same level. We read straight through them; we may not even be conscious they are there even as we incorporate the information inside into our understanding of the full sentence.

Parentheses have specialized uses in academic writing, where they indicate citations. See your particular style guide for proper usage.

These are your workhorses. They work with appositives, which define or clarify nouns such as proper names and locations, and with nonrestrictive elements, which often begin with “who” or “which.” With comma clauses, as with parentheticals, the clause can be omitted without changing the meaning of the sentence.

The record’s producer, Tony Visconti, worked with Bowie throughout his career. (appositive)

Stevie Ray Vaughan, the guitarist on “Let’s Dance,” was an up-and-comer in the Texas blues scene but virtually unknown to national audiences. (nonrestrictive)

My colleague Sarah has delved deeply into the mysteries of the comma, so I’ll refer you to her work for more.

A phrase set off with a pair of em-dashes (those are the long ones) has a special emphasis. Em-dashes may indicate a break in thought; they can also be useful in complex sentences with several clauses, where introducing another comma would make the flow hard to follow.

His asymmetrical features—one eye was permanently dilated, the result of a childhood injury—gave David Bowie an otherworldly look.

The perilous state of Bowie’s mental health—his older brother, Terry, spent much of his life institutionalized—was a recurrent lyrical theme.

Tread lightly with the em-dash; often, the information would be better communicated in two or more simple sentences rather than one complex sentence. There’s a blog post all about these typographical oddities, if you want to learn more.

Lastly, let’s look at an outlier. In academic writing, square brackets may be used inside parentheses, usually for a citation within a parenthetical sentence.

In formal writing, square brackets are most useful when dealing with transcripts or quotations, where they surround interpolated material or editorial commentary.

Many litigants have shared the opinion of Charles Dickens’s character, Mr. Bumble: “The law is a ass [sic].”

Setting foot on the moon, Armstrong said, “That’s one small step for [a] man, one giant leap for mankind.” 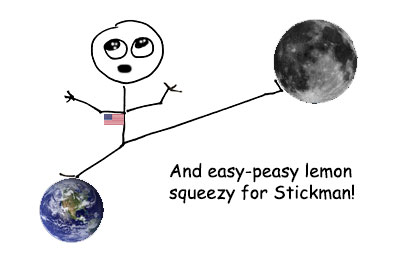 Commas, parentheses, and dashes are all vital tools for packing more information into a single sentence without sacrificing clarity. I’ve enjoyed writing this guide, and—it goes without saying, I suppose—I hope that you, whoever you are, have picked up a trick (or two) to help you along.