January 2, 2020 by ProofreadingPal in Writing Guides

There’s a curious thing about figures of speech, which are the building blocks of what we generally call “poetic language.” When you describe how they work in the linguistic sense, the effect often sounds complicated and unnatural.

A metaphor? An implicit comparison between two dissimilar things, just worked into conversation without so much as a “like” or “as”? Come on. Whom do I look like, T.S. Eliot?

Yet fluent speakers effortlessly use them dozens of times a day:

The jobs report was a shot in the arm.
The new CEO is a breath of fresh air.
My interview was a train wreck.

Speakers formulate and listeners decode these complex equivalencies with no conscious analysis. 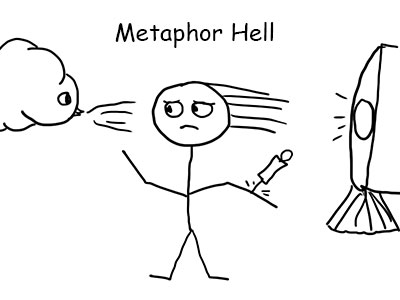 Sometimes this is possible because the phrase is a cliché. Often when a new metaphor enters the language, as has happened with “dumpster fire” over the last decade or so, the adoption is largely intuitive. The first time you hear the phrase, you get it. There is no noticeable adoption period, no explainer articles with titles like, “What Does It Mean to Call Something a Dumpster Fire?” One day, it was simply a thing people said, and everyone knew what it meant without having to be told.

This time, let’s go way out there and look at a pair of related poetic devices that at first seem hopelessly roundabout and exotic: metonymy and synecdoche. In metonymy (from the Greek for “a change of name”), an object or concept is not named directly but identified with the name of something associated with it. In synecdoche (Greek: “simultaneous understanding”), which is a subcategory of metonymy, a part is used to refer to the whole, or vice versa.

When described in abstract terms, this species of wordplay seems wildly esoteric. Unlike in simile or metaphor, the actual object is not named at all; instead, it’s referred to with the name of a related thing or concept, like a code name. How on earth can clear communication result from obscuring the true object of your discussion this way?

And yet you probably employ these devices all the time. When you ask someone, “Lend me a hand,” that’s metonymy. What you’re really asking for is assistance with some task, assistance that will often (but not always) be accomplished by using actual hands. If you use your foot to hold open a door for someone, you’re still “lending them a hand”; and we here at ProofreadingPal are glad to give you “a hand” with your writing tasks, even though on a literal level our assistance involves knowledge rather than manual labor.

The idea is that the hand is the body part associated with help, and so the physical object (hand) stands in for the abstract concept (assistance).

On the other hand, when you say “give a hand” in the sense of applause, that’s synecdoche. A single hand is only part of what goes into applauding; you really need at least two. But “a hand” is an element that’s used to refer to the whole.

These poetic devices are extremely common in popular writing about politics, culture, and sports. “The White House is in heated negotiations with Beijing” is metonymy times three. The White House is a building, and buildings can’t talk; US diplomats are doing the actual negotiating. Feeling warm or flushed is a physical symptom of anger, so by association, angry discussions are “heated.” Neither the physical infrastructure of the city of Beijing nor its 22 million residents are involved, either; that task falls to representatives of the Chinese government.

Synecdoche is everywhere in daily speech and writing as well. The entertainment industry becomes “Hollywood.” Advertisers talk about “capturing eyeballs.” Soldiers in combat become “boots on the ground.” An entire cow is reduced to a head, as in “fifty head of cattle.”

As noted, these sorts of constructions are very common in news and popular writing, and they liven up informational prose quite nicely. For formal academic writing, though, you should approach them with extreme caution. They are a form of shorthand, and while shorthand can be useful when all readers are familiar with the references, it lends itself to imprecision.

Remember that clarity is your number one job. As you write, and especially as you revise, make note of where you’ve indirectly referred to a thing or idea with a related concept; in most cases, the clearer option will be to name the thing outright.